tiger tiger (on the nature of violence) 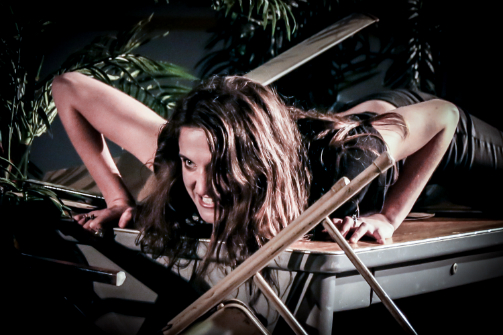 Teri Madonna in tiger tiger (on the nature of violence). Photo by Lee Waxler.

“This is something animal, this is something primal,” snarls Teri Madonna in the world-premiere experimental force majeure tiger tiger (on the nature of violence), written and directed by TEAM co-founder Jessica Alamasy. With the power to tear us out of our "ordinary" well-mannered reality, tiger tiger is an ensemble exploration of public violence. An emotional feast for your eyes, ears, and hearts, the play is inspired by Almasy's personal experiences and based on a real story of three teenagers who break into San Francisco zoo and get attacked by an escaped tiger. Jessica Almasy tackles the idea of waking our inner predatory forces in an attempt to identify the roots of violence, and with tiger tiger she delivers exactly what you crave in an avant-garde play: havoc, humor, and a yearning immediacy.

The strength of the show is the visceral and intense experience of being in the room as the story unfolds. The dark, frenetically punk world of tiger tiger is populated by bewigged hospital patients, girl scouts, a cross-dressing tiger named Svetlana, and even a human-sized wisdom tooth full of—what else—wisdom and compassion. The cast perform with wit, force, and mirth. All of the ensemble are intrepid interpreters of Alamasy’s vernacular which is by turns rueful and pleading, hilarious and sorrowful. Teri Madonna, a seething spirit of the tiger, blasts through a manifesto “I am sick, I am broken…” first forward and then perfectly in reverse; the stunt is so engrossing, as if watching replay of a medical recording, with Madonna adeptly capturing the moment when her character/creature goes from human to animal and then back again. Brandon Titley as Svetlana (that cross-dressing tiger) is alarmingly appealing, pained and sadistic in one sigh. In one epic chunk of the play, Kate Benson is untouchable as she almost single-handedly delivers an entire transcript of a Court TV Channel profile on the tiger mauling; hilarious, and exacting, Benson is totally unwavering.

Through the lens of "coping with violence," tiger tiger bowls through several stages of handling tragedy: from how we witness violence, to how we experience violence first-hand, to what it means to become bystanders of violent events. “I used to be suicidal but now I just live in terror,” cuts in the detonating banshee Odille, brought to life by the cynical Hannah Kallenbach adorned in a bleach-blonde Elvira wig with streaks of lavender. Almasy challenges the notion that there is a right way for how our recovery mechanisms should or must work by exploring trauma in a completely original way—as the fully fledged dilemma that it realistically is. Odille expounds further as she recalls witnessing her father at a particularly low moment in his life when she was only seven: “There’s got to be nothing worse (as a dad) than crying in front of your kids.” From survivors, to critics, observers, and therapists, the characters, one by one, discover what it means to "cope with violence."

Almasy draws the audience in to consider whether we actually have real means to deal with personal pain, while juxtaposing the performance with such memorable one-liners as “I just came and got my period at the same time,” “Let’s finger breathe,” and of course, “Molars can’t drive” with the retort "But I'm a wisdom tooth." tiger tiger delivers humorous catharsis through moments of innocent absurdism, as the collective comes to grasps with having no civilized or adequate social tools to help them handle childhood angsts or grown-up pains.

The script sinuously utilizes a myriad of theatrical elements. The mix of live sound effects created by the actors with Lawrence Schober's 80s-TV-theme meets modern pop-anthem sound design morphs into a delightfully unpredictable cacophony. Light designer Megan Lang’s projections of a live text conversation across the back wall are ominous and capricious while her surgically carved swathes of light slice up the playing space into infinite configurations. Karen Boyer’s costumes, from frilly ball gowns to medical-pink zoo security uniforms complete with tiger tails, are morbidly distressed and supremely inventive. Almasy's choreography of mayhem which at one point basically destroys Christopher Heilman’s nimble, meticulously sparse and colorful set—complete with a questionably functioning vending machine—gets the cast manipulating desks, mic stands, and potted plants, adjusting scenery as part of the non-stop action.

Using every tool at her disposal with unfaltering self-awareness, Almasy truly knows what she’s doing, and she’s doing it well. tiger tiger (on the nature of violence) is an eloquent and jarring work, hitting us in a very defenseless way. The audience laughs then gasps, giggles and cringes, and each time Alamsy knows just how to reset our experience in the blink of an eye.

(tiger tiger (on the nature of violence) plays at Dixon Place, 161A Chrystie Street, through November 21, 2015. Performances are Fridays and Saturdays at 7. Tickets are $18, $15 for seniors and students, and can be purchased by visiting www.dixonplace.org or by calling 866.811.4111.)

tiger tiger (on the nature of violence) is written and directed by Jessica Almasy. Set Design is by Christopher Heilman. Costume Design is by Karen Boyer. Lighting Design is by Megan Lang. Sound Design is by Lawrence Schober. Music is by Dan Veksler. Sound Engineer is Newrence Wills. Production Manager is Ann Marie Dorr. Stage Manager is Eh-Den Perlove. It is produced by John Del Gaudio.