By Caridad Svich; Based on a Novel by Mario Vargas Llosa
Directed by José Zayas 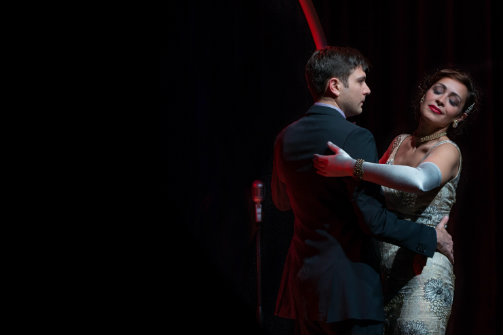 BOTTOM LINE: A rich and warming comedy with poignant comments about morality, love and art.

Mario (Pablo Andrade), a young law student who wants to be a writer, has his life turned around upon meeting Julia (Dalia Davi), his aunt-in-law, and Pedro Camacho (Luis Carlos de La Lombana), a famous and deliciously quirky scriptwriter. What seems to be a fairly simple plot becomes a magical as this play travels through time. The theatrical version of the novel, penned by OBIE-winning playwright Caridad Svich, is based on Mario Vargas Llosa's novel by the same name and, although slightly long at the end of each act, it works beautifully on stage.

Making a stark first impression is set designer Susan Rogers. Long white metal arcs emulate radio waves and an Eiffel tower-like antenna transports us back to an era when stories were told only through words and sounds effects. Much like then, our imagination is captured here and the production's two hours seem to fly by. Andrade plays Mario with grace and ease, and the play begins with Mario having a conversation with Olga (Zulema Clares) and Lucho (Germán Jaramillo) at their dinner table. As they talk about Mario's studies and his aspirations in life, Tía Julia enters and something readily changes in him. Played by the powerful, precise and elegant Davi, she is a brilliantly simple and unassuming woman who has divorced her husband, but still believes in and searches for love. More than just a pair of people that grow into loving each other the more they get to know of one another, Mario and Julia personify on stage in a deliciously witty and sensual manner the struggle between the Apollonian and the Dionysian forces within us.

The play carries on as Mario works at a radio station while struggling to find his voice as a writer. A great admirer of the radio station's main scriptwriter and radio-drama genius Pedro Camacho, Mario eventually sums up the courage to talk to him and another pinnacle relationship appears. That of the mentor and his pupil. Camacho, a character living in his own sphere, morphs into the characters he creates and reminds us that we are but performers ourselves always changing masks according to whatever show we must put on in order to carry on. De La Lombana gives a powerful and endearing performance.

Svich manages with Mario, Julia and Pedro to carve strong archetypes that also work as believable and highly relatable characters. The ensemble is composed of talented artists across the board and their performances enrich the evening. Be it the scenes with Francisco (played by the charismatic and smooth Gerardo Gudiño) and Josefina (played with charm and a nostalgic touch by Ana Margarita Martínez-Casado), the staple actors for the radio novelas that get caught up in Camacho's quirky writing and ever evolving dramatic instincts, or the tender moments between Mario and his childhood friend Javier (played with a misleading simplicity and easiness by the charming Christian López Lamelas), or the scenes between Camacho and Genaro (played by Alfonso Rey with a comedic flair and a pinch of neurotic despair), the owner of the radio station, this show is tightly put together and offers us a balanced and poignant story that is also a love letter to the old styles of comedy and storytelling of the '40s and '50s.

Props must be given to director José Zayas for constructing a seamless patchwork of acting styles and for knowing how to profit from the actors different accents and cultural backgrounds. By accepting their different nationalities onto the stage, more life and energy is breathed into the production.

Tía Julia y El Escribidor comes across as a well built and well performed play that reminds us about our passions, our faults as humans and the possibilities life opens up to us when we give it a chance. Definitely a show for those looking for a breath of fresh theatrical and poetic air.

Tía Julia y El Escribidor is written by Caridad Svich and directed by José Zayas. It is produced by Repertorio Español, under the management of Fernando Then. Set design is by Susan Rogers. Costumes design is by Leni Mendez. Light design is by Manuel da Silva. Sound design is by David M. Lawson. Cristina Ayon-Viesca is the assistant director and subtitles are by Edna Lee Figueroa.