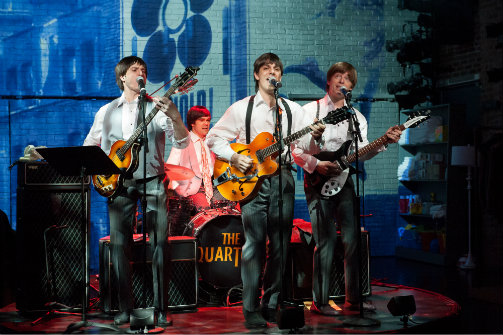 BOTTOM LINE: When this mod show rocks, it really rocks, but the musical numbers are so strong that there should be more of them.

If you think about it, The Beatles and William Shakespeare make sense as a pair. They are arguably the most popular band and most popular playwright of all time and both deal in themes of love and have a knack for the double entendre. These Paper Bullets! brings out their similarities as Much Ado About Nothing gets The Beatles treatment.

Benedick is now Ben (Justin Kirk), the lead singer of The Quartos. He's basically the John Lennon—cynical and smart. That would make Claude (Claudio in the Shakespeare), the Paul McCartney. Claude falls in love with Higgy (Ariana Venturi), a combination of Hero and Twiggy, at first sight. Higgy models for her cousin Bea (Nicole Parker), a fashion designer (Jessica Ford's costumes are perfectly mod and should be sold in the lobby) and Ben's love interest/sparring partner. Don John, the villain who longs to get revenge on his brother, is now Don Best (Adam O'Byrne), ousted drummer of The Quartos who was replaced by his brother Pedro (James Barry). Ringo wasn't related to Pete Best, but it still works.

Not everything is as clever. Though Rolin Jones does an admirable job of combining Shakespeare's dialogue and '60s slang, nothing beats the original. The dialogue is so on the surface that Bea and Ben's courtship isn't as satisfying despite Kirk and Parker's chemistry and skill at physical comedy. Jackson Gay's direction works especially well in the scenes in which Bea and Ben are eavesdropping on their friends, maneuvering their way across Michael Yeargan's fitting turntable set, but all this running around sometimes drags.

That could easily be fixed with more songs. One can't help but wonder why this play with music can't just be a musical. Even with the few songs there are, Billie Joe Armstrong tracks the evolution of the Fab Four's music and Beatlemaniacs will have fun identifying his inspiration for each song, which are also catchy in their own right. He should never stop working with Tom Kitt, who also did beautiful orchestrations for the stage version of American Idiot. The Quartos may not be The Beatles, but they play well together. The fourth member is the George Harrison-like Balth, played by Lucas Papaelias. Though he doesn't have many lines, he nails them all with Liverpudlian delivery. Here's hoping for a cast recording with bonus tracks.

(These Paper Bullets! plays at Linda Gross Theater, 336 West 20th Street, through January 10, 2016. The show runs 2 hours, 15 minutes with an intermission. Performances are Mondays and Tuesdays at 7, Wednesdays at 2, Fridays at 8, Saturdays at 2 and 8, and Sundays at 2. No performances December 24-25 or January 1. Additional performances December 20 and January 3 at 7. Tickets are $40-$75 and can be purchased online at ovationtix.com or by calling 866.811.4111. For more information visit atlantictheater.org.)