TAKE Dance: There and Here

Directed and choreographed by Take Ueyama

Off Off Broadway, Dance
Ran through 3.28.15
Schimmel Center for the Arts at Pace University, 3 Spruce Street 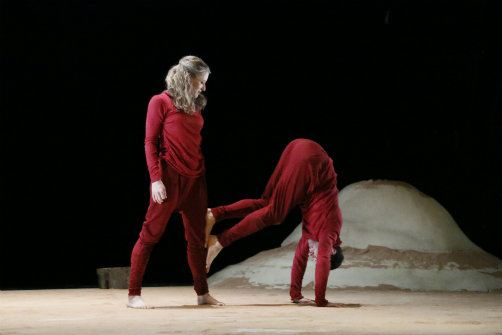 Amy Young and Orion Duckstein in There and Here. Photo by Phyllis McCabe.

BOTTOM LINE: TAKE dance’s full-length work There and Here makes for an evening of visual poetry, meditative and inevitable, with sand pouring down from the ceiling and dancers pausing at moments and then taking flight.

Celebrating his tenth season as the choreographer and director of TAKE Dance, Take Ueyama, a former baseball player and acclaimed Taylor dancer, pushes movement with regard to his culture and past. His latest work There and Here is demonstrative of the stages of life that we go through. This full-length dance is more of a tone poem, visually arresting and quiet at the same time. Each duet ranges in scope, starting with the writhing, infantile movements on the sand-covered stage to the figure of death gently rocking a figure into a deep sleep. We see another dancer slowly letting sand drop, as if an hourglass commencing its release. Symbolism is everywhere.

The stage is completely bare except for some wooden sculptures and sand. A lone sand dune and a musician elevated behind the stage, almost as if floating mid-air, creates a minimal yet ritualistic feel. The set pulls us right into the world of TAKE Dance without distracting from the actual dance. Kato Hideki, the sound artist/musician, is revealed after the first duet behind the dancers seemingly suspended in mid-air. He is gently lit by lighting designer Lauren Parrish and placed on a pedestal that is not distracting but adds to his commanding, yet ambient music. We feel as if we are in the midst of a storm and drifting out to space; Hideki seems to use all the same instrumentation to achieve this.

The minimal set really sets the stage for the dancers who are also moving past their own influences, including Miki Orihara, legendary Graham dancer turned avant-garde solo artist, to Jill Echo, Amy Young, and Orion Duckstein, who also danced for the Paul Taylor Dance Company. We see Orihara fuse her ephemeral Graham style with Take Ueyama’s jagged and earthy edginess.

The duet between Young and Orion has an intimate and peaceful mood as they trace the lines of each others' curves. Great dance, like sculpture, can shape what and how we look. The sand, kicked up by the dancers, emphasizes the shapes of their red footprints as it falls. The phrases of movement have no flowery arms movements, but sudden weights shift. A charismatic and wild Jill Echo is supported as she falters. The idea of support is so effortlessly demonstrated by her partner, the fearless and bounding John Eirich, as he runs toward her with open arms, catching her. At one moment, all the women seem to be floating above the entire space reminiscent of a Chagall painting and a flying Superman.

The dancers are clad in red pants and blouses by haute couture designer Cesar Alcocer. Take’s abstract movements and wearing of black pose him alternately as god-like and then as death. At first it seems natural on him, but as the show draws to a close Nana, the angelic dancer, is swept into his arms and rocked by him. Take has been an anchor to the entire show in that he seeps from the blackness, donning black, to remind us that time is always moving. The remainder of the sand falls from the ceiling, not unlike an hourglass. Two dancers, Kyle Hotchkiss and Marie Zvosec, seem to be in purgatory; tossed maniacally and tormented, they raise the stakes. It feels as if they are reliving the guilt over and over with few respite, like they are at the entrance to the gates of hell. At one point, the dancers move about wooden sculptures and surround dancer Brynt Beitman captured in a spotlight; it feels like we are attending the ancient rituals at Stonehenge. They then break into a crazed group unison phrase which, alongside Hideki's drumming, makes it feel like your heart will burst through your chest. This piece has so much in it that I would love to watch it again. In fact, I highly recommend a first and second viewing.

(TAKE Dance's There and Here played at Pace University's Schimmel Center for the Arts, 3 Spruce Street, through March 28, 2015. Performances were Thursday, Friday, and Saturday at 7:30PM. Tickets were $29; for more information visit http://schimmel.pace.edu.)