Off Off Broadway, New Play
Runs through 7.7.15
The Paradise Factory, 64 East 4th Street 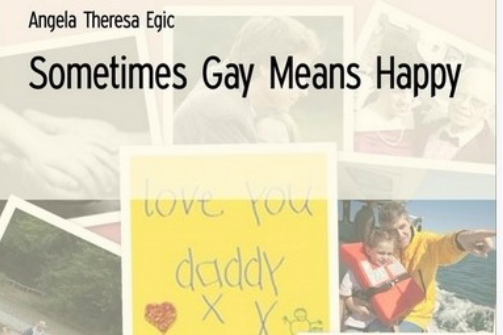 BOTTOM LINE: A story of forgiveness, last chances, and the unbreakable love between a father and his daughter.

Let me tell you a fairy tale: There once was a king and his queen and they had two beautiful daughters—nay!—princesses. They lived in a land of love and happiness, play and make-believe. But, unbeknownst to the rest of the family, this king had a deep secret. A secret he never revealed until one tragic night, a night that ended in disaster, causing one of his daughters to leave the land of love, happiness, and make-believe. She continued with her life and he, his. But they always thought of each other and the love that was. The end.

This is the premise of Sometimes Gay Means Happy, now playing at The Paradise Factory, and the fairytale father’s deep secret is he’s gay and he’s leaving his children’s mother, his wife, after 14 years of marriage. World crushed, his eldest daughter vanishes from his life, and, of course—years later—this play takes place.

Written and directed by Angela Theresa Egic, it opens with Tori Roth (a super-committed Emma Peele) as your “Broadway Baby”: a newscaster reporting theatre buzz for a local NYC news station. Tori finds herself revealing a bit of news that surprises her more than anyone—legendary Broadway and West End theatre star, Victor Rothchild (Ian Maynard), has suffered a “heart attack” during rehearsal and has been rushed to the hospital. After Tori (confusingly) breaks down and rushes off set, we learn the reason why: Rothchild is her father. Oh, and it’s not a heart attack he’s suffered from—he’s been living with AIDS for years and it’s finally taking its toll. Mic drop.

Tori’s been “estranged” from her father since he “ruined her birthday and her life” one fateful opening night so many years ago, revealed to the audience in a flashback featuring a younger Tori (Elizabetta Malagon) and a younger Victor (Matt Saxton). As Tori tries to calm herself, Tori’s younger sister, Violet (Corrie Legge), intrudes upon the scene, come to beg Tori to see their father in his time of need. But Tori “hates him,” or so she’d have us believe—but her irrational actions and raw emotions tell us otherwise. Cue the much needed cathartic yelling, shaming, and soul revealing.

In the end, Tori visits her Daddy and he accepts her with open arms. She is conflicted and confused, happy and devastated. She knows she’s done him wrong and she regrets the lack of time they have left together. She starts to do whatever she can to make up for lost time, finding a way to finish the fairy tale that started long ago. The end.

This play is definitely a work in progress and a posted run time of 70 minutes did not hold true. But there is something therapeutic and sweet about seeing a child run back into her father’s arms. Sometimes gay does means happy; when it doesn’t, it means let go, forgive, and love. And of course a fabulous fairy tale ending.