Book by William Luce; Lyrics by Hy Gilbert; Music by George Fischoff
Adapted from the Novel by James A. Michener
Directed by Tisa Chang
Produced by Pan Asian Repertory Theatre 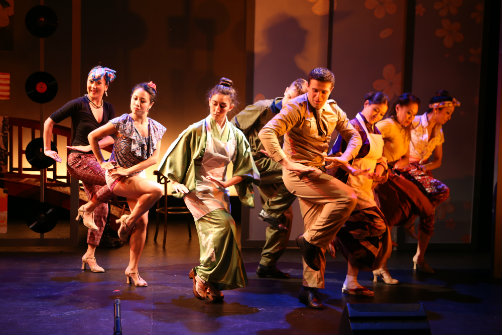 BOTTOM LINE:  This musical revisits the haunting clash between Eastern and Western cultures in a not-so-long ago generation, and tells a love story that defies these cultural barriers.

Sayonara is a re-imagined musical adapted from James A. Michener’s novel, and directed by Tisa Chang of Pan Asian Repertory Theatre. The novel was also made into a 1957 Academy Award-winning film starring Marlon Brando and Miiko Taka. This musical production is actually a New York premiere, with a book by William Luce, lyrics by Hy Gilbert and music by George Fischoff. It is a story set in 1952, post-WWII Japan, about the forbidden love and marriages between two disparate cultures.

The story begins with Korean War star pilot Lloyd “Ace” Gruver (Morgan McCann) being reassigned to Japan. He supports the military’s opposition to marriages between American troops and Japanese citizens, until he experiences a love that challenges his own prejudice. He is opposed to the marriage between Private Joe Kelly (Edward Tolve) and local girl Katsumi (Natsuko Hirano), but still acts as a witness to their marriage out of friendship. Later on, he meets the star performer of the Takarazuka performing troupe, Hana-Ogi (Ya Han Chang), and everything changes.

When I think of Japan I am reminded of a highly refined and polished culture. Their visually striking traditional costumes, highly stylized and controlled body movements in performance, and simple yet supremely well balanced gardens and architectures—they mark the essence of Japanese identity.

The character Teruko-san (Ako Dachs), as the leader of the Takarazuka performing group, is most memorable in this production. Together with choreography by Rumi Oyama, where she combines Western dance styles with Japanese folk dances, the highlight of the show falls on the dancing. Dachs is a rarity to see on American stages, a portrait of a confident and dignified Asian woman who stands and speaks with pride and elegance—a quality young Asian women aspire to, growing up in Asia, but that we seldom see on Western stages.

The image of the dignified Takarazuka girls crossing the ornate Japanese bridge, lead by Teruko-san (set design by Sheryl Liu) could be a Japanese painting. This image makes Gruver, waiting on the other side of the bridge for Hana-Ogi appear like an outsider. It is also a metaphor for the star-crossed lovers, as in the legendary Star Festival that Gruver and Hana-Ogi attend during the story. The Star Festival celebrates the meeting of two deities Orihime (represented by the star Vega) and Hikobosi (represented by the star Altair). They are lovers separated by the Milky Way and are only allowed to meet once a year on the 7th day of the 7th month, if the skies are clear.

The ending of the story leaves a bittersweet taste, but is a testimony to a time when cross-cultural marriages were unacceptable, and when one could lose his or her country's citizenship by doing so. The cast is strong and the dancing is well crafted. A simple keyboard and a wind instrument—that sometimes echoes a traditional Japanese instrument—is composer Fischoff's effort to provide an Eastern flavor. I only wished for a more lush orchestration, or a stronger and brighter keyboard during the energetic dancing scenes.