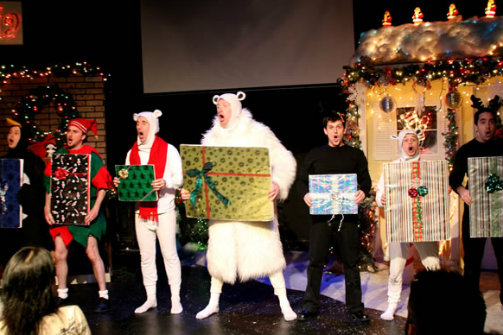 Not exactly, but that's how Santasia would have it. This salty holiday treat is performing in its sixteenth year; its previous incarcerations impressed audiences in California before transferring to New York where it now plays at St. Luke's Theatre. Directed by Shaun Loeser (also a standout in the cast), the production moves at a clip, easily switching between pre-filmed sarcastic Christmas infomercials and holiday skits presented by six middle-aged men who may or may not be wearing holiday sweaters (or anything at all).

But the men are enjoying themselves up there, and it's hard not to smile along with their hokey jokes and paltry attempts at dancing and drag. A highlight is when Brandon Loeser appears as the virgin Mary on an episode of Jerry Springer where (s)he confronts Joseph about a baby to be born on the 25th. When Joseph asks how the pregnancy could be possible, Mary answers, “God only knows.” The situation is funnier than its dialogue or execution, but that’s okay. The actors are self-aware and the show never takes itself too seriously.

Another memorable scene reimagines the herald angel telling the wise men about Jesus’ birth. Brandon Loeser as the angel proclaims the miraculous conception like a sales pitch, which wise men Lon Gowan and James Elden have none of. Later, the wise men (joined by Shaun Loeser) compare gifts for the nativity only to realize that the least desirable present, myrrh, was re-gifted after one wise man gave it to another for his anniversary last year. (Later, an infomercial on re-gifting claims millions of presents are neglected each year while Sarah McLachlan’s “Angel” plays lachrymosely in the background.)

Many of these commercials that mask scene and costume changes are as entertaining, as, if not more than, the live performances. They include claymation creations of a penguin’s flight attempts and children building snowmen over the San Andreas Fault—all kooky as they are adorable.

In his bio, lighting designer Wynn Zucchero is thankful for Santasia because it gives him the opportunity to “feel all warm and fuzzy inside” as one hopes to around the holidays. Then he adds, “Or is that the scotch?” Santasia perhaps asks the same question, and maybe we’ll know the answer in the show’s seventeenth year.