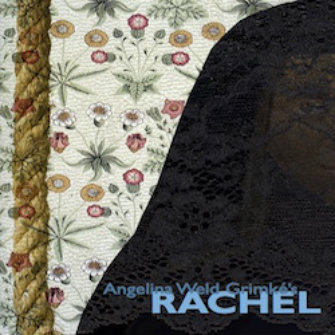 BOTTOM LINE: A newly infuriated Black woman cannot cope with the futility of lynching in this beautiful, necessary production.

Rachel Loving (Santoya Fields), 22, female, Black: a domestic by all accounts. She helps her family and she cares for the children in her building, but Rachel is crumbling. Upon learning that her father and older brother George were lynched on the same day ten years ago, Rachel fears for the plight of every black and brown baby. Surrounded by Mrs. Loving (Bonita Jackson), her other older brother, Tom (Damone Williams), and her strapping beau John Strong (Temesgen Tocruray), Rachel tries to rise above the deafening cries of little black babies, to keep a semblance of hope in God, and to ultimately survive the ingrained and visible trauma of the black experience. This century-old work by Angelina Weld Grimke still has serious legs.

Halfway through Act I, Williams and Tocruray enter out of character with the lovely Selena and Andrea Alphonse, two five-year-old twins who take a place centerstage. The twins begin to play with each other: tickle, pinch, laugh. Their effervescent giggles melt your heart and buoy your sagging soul in this renovationist church in Fort Greene. As they play, however, our two actors stoically strip the raised platform stage apart, creating uncomfortable spaces between sections of the wooden floor. There are noticeable chasms in the aftermath of the Loving history lesson when a frustrated mother reveals to her two surviving children their father and older brother were lynched for protesting atrocities against other Blacks.

The reality of these chasms penetrates the play, creating that sinking pit feeling; yet there’s the giggles, there’s the promise of tomorrow. This very real juxtaposition matches our world with eerie similarity. Director Courtney Harge uses this chasm effect majestically, calling her actors to almost leap to each other throughout the piece. Harge blissfully maneuvers this play into its many disastrous lights. It’s almost comical how Fields’ Rachel straddles two pieces of stage while she rejects Tocruray’s John. It’s almost comical, but it’s not. You notice an actor slip and the current eco-political climate of this group jumps out at you.

This is a glorious set by New Brooklyn Theatre sophomore Courtney Nelson. A pleasant, upscale apartment with the fixings: giant coal stove, large washtub, new plates, and dishes. The cobalt pot even, I was told, was Maya Angelou’s. The kerosine lamp atop the bookshelf effortlessly ushers us into the 1900s or, a dubious time in the North. The doilies and chairs read that the Lovings have a modicum of success, yet as Williams’ Tom decries his lack of work as an Engineer, something is still amiss. Assisted by Paul Hudson's wonderful lighting, the play oscillates between washes of warm amber and cold, isolating specials to represent the whiplash of trauma. In tandem with these visuals, I loved Grimke’s polemic interplay between young and old, North and South, male and female, because it represented so many untouched factions of “Blackness”.

Fields’ Rachel is a docile and sweet creature, a striking contrast to the bombastic teens one might see on World Star Hip Hop today. Rachel’s ambition to be “a mother of black and brown children” isn’t foiled by barrenness or funds or will, but by the oppressive climate. And the glory of this show really rests in the moments when, almost drowned out, Rachel speaks in contest to a mixture of crying children and canned sound bites from current news stories (the enticing sound design is by Rebecca Shumel). In a relatively short scene with Fields and Lauren Lattimore, who plays a concerned Mrs. Lane, I really noticed the reverberation of the Loving’s history. As the two women speak about the hardship on black children I realized that one lynching is everyone’s lynching.

This play is sort of a wonder. Originally commissioned by the NAACP, its primary goal was to appeal to white women’s views on lynching. Through Rachel, “a woman above reproach,” the audience was supposed to deign how this could happen to a good one. I wonder how it went back then. This production faithfully unpacks those racial issues, but also that of mental health in the black community. There are beautiful moments when Jackson’s Mrs. Loving snaps and retreats, ashamed she burst with emotion. Her consistent frustration seems ingrained in Black women, almost their curse. When Rachel begins to exhibit similar traits there is a deep mourning.

And the men: though Tocruray’s John is indeed strong: with his conked hair and Maitre ‘d job, he is noticeably limited to a ceiling and strives within reason. Tocruray keeps a plastered smile on, almost minstrel-like. You know the character’s service-oriented job has listlessly sunk into his bones. Nicely contrasted, however, is the eager Tom. Williams’ Tom is suave and learned, but is also forced into corners. Sadly, his fuming frustration, though unseen, is almost inevitable.

It’s not hard to see this play: our news is comparable. This piece is definitely marvelous for political advocates, but also catharsis lovers. I couldn’t help but think about Sophocles’ Oedipus or The Peloponnesian War: stories we have applauded for their deft identity with futility, history, and dramatic irony, stories that are worldwide classics. Here’s a lesser known classic right in your backyard.

Blessedly, the production hosts a wonderfully moderated talkback after every performance to further the conversation. If only to repeat how necessary this show is, New Brooklyn Theatre has made this summer’s repertory of Rachel, and its “present” play Las Meninas by Lynn Nottage, free, free, free! If you needed a great excuse to see wonderful Brooklyn theatre, they just gave you a big one. Find a treasure of similarity, nuance, and life in Rachel, staged and directed with noticeable verve.

(Rachel plays at Irondale Ensemble Project, 85 South Oxford Street in Brooklyn, through August 29, 2015. It plays in rep with Lynn Nottage's Las Meninas. Performances (of one or the other) are Mondays through Fridays at 7:30, and Saturdays at 1 and 7:30. For schedule and to reserve tickets visit www.newbrooklyntheatre.com. Tickets are free, but a donation is suggested.)