By John McManus; Directed by Ciaran O'Reilly
Produced by The Irish Repertory Theatre 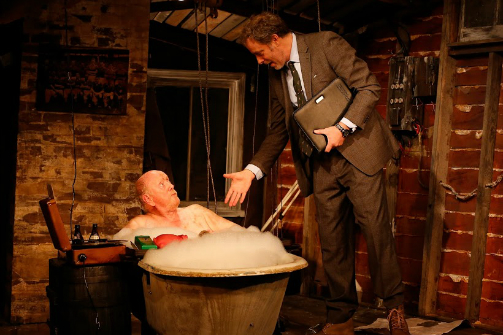 Peter Maloney and Rufus Collins in The Quare Land. Photo by Carol Rosegg.

BOTTOM LINE: A character-based comedy with a plot and comedic style that could be hilarious for some audience members—and possibly aggravating for others.

In the beginning moments of The Quare Land, the new play by John McManus having its American debut at the Irish Repertory Theatre, a dingy cabin, complete with smoke puffing cheerily from its chimney, spins around on the rotating stage to reveal an equally dingy interior. The set (by Charlie Corcoran, props by Deirdre Brennan) is meticulously messy, with newspaper strewn about the floor, a toilet that looks like it hasn’t been cleaned in decades, and a pulley system with ropes used to deliver beer bottles from the toilet to the bathtub, the grimy centerpiece of this production.

As with many Irish Rep shows I’ve seen, the design is stunning: a comprehensively conceived and incredibly believable environment executed on a compact stage. It’s these kinds of high quality but small scale productions that are, in my opinion, the true gems of New York theatre.

After a little comical scrubbing on the part Hugh Pugh (played by the excellent Peter Maloney), an unannounced visitor arrives for a proposition for Hugh, who happens to be taking his first bath in four years and who, we come to understand, is a crazy off-the-rocker coot who likely hasn’t interacted with another human in about four years either. Maloney’s Hugh is a near flawless delivery of a comedic performance, packed with quirks and eccentricities that make him a lot of fun to watch.

The unannounced visitor is Rob McNulty (Rufus Collins), a developer who has a proposition for Hugh that, due to Hugh’s ceaseless banter, it takes about half the show to actually get around to. The bread-and-butter of this show is the shtick between Hugh and Rob. Rob has something important to talk to Hugh about, but Hugh is too distracted by telling his own stories (which stretch far and wide over the course of his 91-year life) to let Rob finish a single sentence.

When we do get around to the proposition, it involves (and I’m not giving too much away here) a golf course that Rob wants to build on a plot of land that Hugh doesn't know he owns. At this point, the shtick switches to outlandish negotiation, as Hugh slowly realizes he’s got Rob by the figurative balls.

The stakes are high for Rob but, as an audience member, I found it hard to engage in this essential element of the plot. Generally speaking, I’m not a big fan of developers and their motivations, but Rob's character didn't inspire either empathy or contempt in me, and so I found myself pretty ambivalent towards to the outcome of the central conflict of this story.

This feeling is likely a symptom of the divisive nature of this show’s style of comedy. While I felt a slow burn of frustration at the inability of these two men to communicate, many others in the audience were laughing heartily, genuinely delighted by, especially, Maloney’s undeniably excellent performance. If you’re the type of person who enjoys watching a crazy but endearing old guy frustrate the hell out of a younger business man, then this show will deliver. If, like me, you tend to grow frustrated at conversations that don’t go anywhere, then you might want to sit this one out.