The Pirates of Penzance 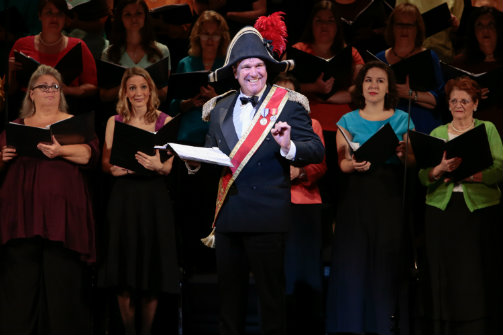 Douglas Hodge in The Pirates of Penzance. Photo by Erin Baiano.

MasterVoices, a company devoted to choral music, opened its 2015-2016 season with a two-night concert version of The Pirates of Penzance, the Gilbert & Sullivan operetta that has been tickling audiences’ funny bones since its 1879 premiere. Joining forces with the Orchestra of St. Luke’s, the chorale hosted a number of high-profile guest stars playing the principal roles, including a Tony Award winner, three Tony nominees, several Broadway vets, and a world-famous operatic soprano. With all that talent and experience on display, the fact that the performance itself (helmed by artistic director Ted Sperling) was a little rough around the edges would distress only the most exacting of audience members.

Vocally, the strongest performances came, naturally, from the singers with the greatest experience in opera—namely, Deborah Voigt as Ruth and Phillip Boykin as the Pirate King (hamming it up way beyond even what the ridiculous plot requires). A recent fake opera star (Christine in Phantom), Julia Udine sang and simpered prettily as the ingenue, Mabel; Montego Glover and Betsy Wolfe, to their credit, committed totally to their small supporting roles. As romantic hero Frederic, Hunter Parrish sang sweetly if not especially powerfully. And Douglas Hodge, so thoroughly lauded for his Broadway debut in La Cage aux Folles in 2010, reminded everyone why he won all those awards with his seemingly effortless turn as Major General Stanley, performing one of the most famous (and difficult) songs in Gilbert & Sullivan’s oeuvre.

Backing all these stars up was a chorus of over fifty, and it was a treat to hear such a large, full sound live on stage. Gilbert & Sullivan’s works are celebrations of silliness and exposés of absurdity, but musically they are no joke. The rest of MasterVoices’ season inclines toward the dramatic; The Pirates of Penzance kicked things off with a lighter touch. Those of us who appreciate the “infernal nonsense” of G&S should keep our fingers crossed they’ll be back next season.