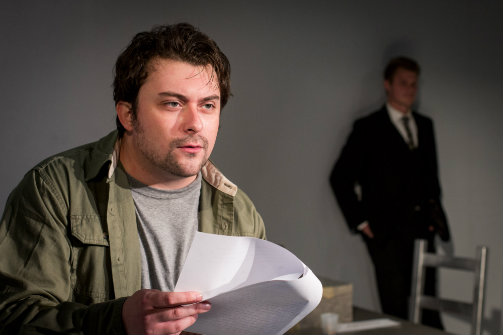 Kirk Gostkowski in The Pillowman.

BOTTOM LINE: A disturbing, audacious play, presented in a capable production that never quite blows your mind the way you hope it will.

Irish playwright Martin McDonagh is, to put it mildly, no softie. His brutal, pitch-black comedies have made audiences gasp and squirm on both sides of the Atlantic. The Pillowman, which premiered in London in 2003 and came to Broadway two years later, concerns possibly the most vile of crimes: the murder of children. Variations Theatre Group (in association with the Chain Theatre) is currently reviving the play, as well as the controversies that inevitably attend it.

In a scenario that recalls Kafka and Orwell, a mostly unpublished writer by the name of Katurian (Kirk Gostkowski) has been brought to a police station for questioning. At first he’s concerned that the authorities see something anti-establishment in his stories (this is evidently not a free country), but it turns out his supposed infraction is not at all political. According to the cops, someone is out there killing children in ways that mirror the writer’s own tales. Over the years, he has churned out scores of gruesome fables of youngsters coming to harm. But because the police cannot be trusted in a totalitarian state, neither Katurian nor the audience know what stories to believe.

The Pillowman forces you to confront numerous questions: Why do people commit acts of violence? Is a story ever just a story? What does “evil” really look like? As I watched the drama unfold, I also found myself asking, Why the hell didn’t I make more of an effort to see this play in its Broadway incarnation, with its A-list talent (including Jeff Goldblum and Billy Crudup) and Tony-nominated design? Part of the thrill of the show is watching as some of Katurian’s most horrifying works come to life, shedding light on his own childhood and family history. Variations’ production uses video design to depict these scenes, which are extremely disturbing. However, I couldn’t help wondering how much more effective those moments might have been had they been performed by live actors, as they typically have been.

Granted, it’s unfair to expect Broadway-level stagecraft in an off-off-Broadway space. That said, one of the subjects of The Pillowman is the magic of storytelling—without sufficient magic, the play is simply an extra long, cleverer-than-usual police procedural. This production’s small cast is solid (particularly Deven Anderson as the lead detective and Kyle Kirkpatrick as Katurian’s childlike brother), but you want them to be extraordinary; Greg Cicchino's direction and the production's design are thoughtful, but not dazzling.

At a running time of over two and half hours, with content that would disconcert even hardcore fans of Law & Order: SVU, The Pillowman is a major investment of time and energy. The audaciousness and intelligence of McDonagh’s script entice us to make the investment. For maximum returns, we are obliged, like Katurian, to delve into our own sense of fantasy.