The Painted Rocks At Revolver Creek

Written and Directed by Athol Fugard 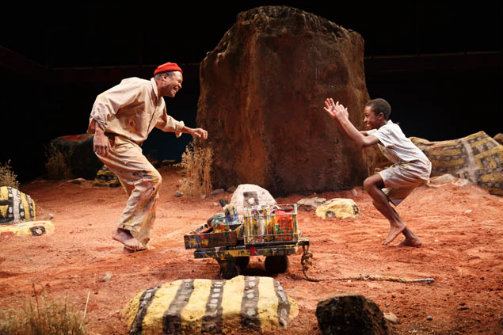 BOTTOM LINE: Through his unique art in 1980s South Africa, an oppressed elderly black farmhand stands up for himself with the help and witness of a young boy.

By the early ‘80s, The National Party had just about finished removing all non-White South Africans from their homes, segregating them, and reducing their livelihoods (apartheid). The land was greatly disturbed, not only by the conflicts and protests that arose as a result, but by new tillers, the Afrikaners, coming in to grow new crops in the soil. Surviving the arduous climate for years, and near the end of his life, is Nukain (Leon Addison Brown), popularly referred to as Tata, a black farmhand who has grown into a brittle stalk. With rounded shoulders and a curved back fashioned by oppression just as much as by hard work and age, Tata has endured and observed much, even if few have truly seen him. Tata’s first and last stand to be perceived and accepted as a man is beautifully illustrated in Athol Fugard’s poignant The Painted Rocks at Revolver Creek.

Set in a rock garden with vibrantly-painted rocks, The Painted Rocks at Revolver Creek begins with a lot of energy and action, while transporting us to a place of beauty and fancy. Bokkie (Caleb McLaughlin), Tata’s young sidekick, moves often like a jumping spider, making the audience traverse the whole stage with their eyes. His enthusiasm and spryness are a good match for Christopher H. Barreca’s imaginative, though unnatural-looking, set. While gazing at the red sand and multi-color display, it’s hard to imagine that the artist is none other than Nukain himself. How does he find the time or the desire, given his harsh life, to paint rocks?

Therein lies the substance of The Painted Rocks at Revolver Creek. Speaking as much with paint as he does with words, Nukain creates art where there is none, and uses color to express sunny sentiments that are hard to feel or utter.

Departing from his standard fare of flowers and embellishments, one day Nukain chooses the biggest rock, untouched before now, to tell his story. “The Big One,” symbolizing his bosses Elmarie (Bianca Amato) and her husband, is given prominent eyes.  And with those eyes, not only can the rock finally behold Nukain, the real flesh-and-blood man of dignity, but those eyes can also take in Nukain as a stick figure with an important past and present. It’s a triumphant moment for Nukain, one that Bokkie shares with pride. Like cave paintings, which are thought to be of religious, communicative, or ceremonial value, Nukain’s painting speaks of a fading man who wants to be remembered, and dare he hope for it, celebrated.

The highs of defiance and warrior cries remain until Elmarie sinks the mood. In her presence, Nukain’s being and strength retracts, returning once again to the lowly and frightful man that apartheid has made him. Not only does her authority make him shrivel, but when she orders him to paint over his life’s story, a fact made known to her that she still does not see, it devastates his and Bokkie’s spirit. Can they make her see? With apartheid reforms just a few years away, there may be hope.

With optimism being a rare currency in South Africa's Mpumalanga Province during this time, The Painted Rocks at Revolver Creek provides a sturdy platform to discuss change while regaling us with cultural flavor and a charming rapport between a spiritual father and son. Though the first act is stronger, more profound, and more lively than the second, the arc and the completion of the story is there. The dark and the lightness, too.

You may be reminded of Shel Silverstein’s Giving Tree in Nukain’s relationship with The Big One, especially if you, like some others, believe that there is a negative and abusive relationship between the boy and the tree. The notion of an inanimate object seeing someone through life’s stages is there, as is the vast age differential; in both works, age and mortality are discussed. However, whereas in Shel Silverstein’s work the boy takes everything from the tree, it seems that in Athol Fugard’s work, the opposite is true. Here, it is the rock that has all the rights and provisions.

You may chuckle when Elmarie declares to a grown up Bokkie, now known as Jonathan (Sah Ngaujah), that Afrikaners are like the Bible’s Job. But her earnest statement makes it clear that the Black Africans and the Afrikaners’ position on apartheid are very opposed. At one point, Jonathan and Elmira ask each other if it’s possible for each to be understood by the other. What will you think? Whether Fugard’s contemplative and rich play drives you to a firm opinion is secondary. First and foremost, what will stay with you is the storytelling, the performances, and the imagery that you encounter on the journey there.