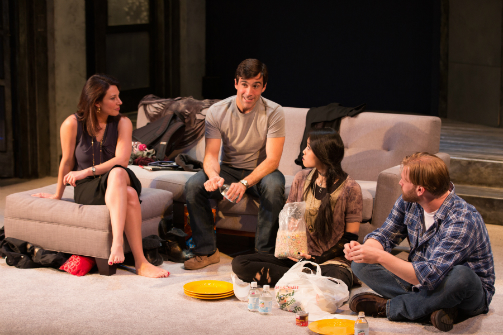 BOTTOM LINE: An intense look at our contemporary political climate, with some provocative questions about privilege and power.

“I wonder what would happen if someone fell from this far up.”

So begins Promising, Michelle Elliott’s topical new play about sex, politics, and power. As the race for New York City Council enters its final stretch, rising political star David Carver (Jake Robards) is slapped with an allegation of sexual assault. Camped out in his Upper West Side penthouse with his advisors (Jolie Curtsinger and Zachary Clark) and younger sister (Kim Wong), the quartet must pull together to ensure that David’s fall does not culminate in his destruction.

As the nation readies itself for yet another presidential election, Elliott’s piece feels particularly relevant. With her exploration of the relationship between privilege and political opportunity serving as the backbone, she presents some provocative questions: how do we determine potential? Can we be defined by a single action? How far can those with privilege really fall? While Promising’s dramatic arc may be somewhat lacking, veering too far towards melodrama in its final scenes, its presentation of these questions is more than enough to create a compelling piece of theatre.

Terry Berliner’s direction was similarly marked with strengths and weaknesses. Her blocking was superb, beautifully utilizing James Fenton’s appropriately chilly scenery to illustrate the ever-shifting power dynamics amongst her characters. A similar touch, however, was missing from the production’s pacing, as the dramatic tension never seemed to reach its boiling point in an organic, understandable way.

The company is uniformly solid, with Zachary Clark a standout. As Shed, David’s advisor/speechwriter/friend, he manages to strike a careful balance between frisky and thoughtful, and emerges from a somewhat overblown confrontation with David with much of his character’s integrity still intact. Kim Wong is also strong as Gemma, David’s half-sister, realistically capturing the spiritual burdens of millennial activism.

While it may not join the canon of renowned political dramas, Promising is a thoughtful exploration of our contemporary political culture—and, more importantly, a wonderful showcase for some—ahem—promising talent.