Written and Directed by Antony Raymond
Produced by Elsinore County 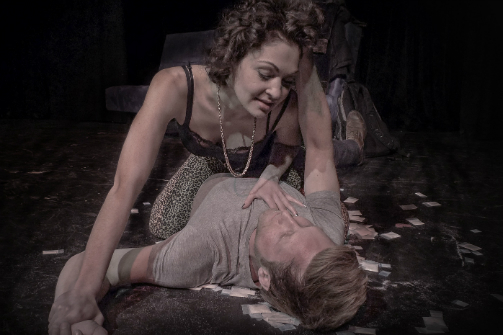 BOTTOM LINE: When two out-of-control siblings meet for the first time, their sex-filled lives spiral way past the line.

An undeniable truth of the human condition is we are great at making bad decisions. And, as Antony Raymond’s Pretty Babies poignantly shows, some people are better at it than others. Toxic worlds collide when Jason, an arrogant egoist who cheats on his girlfriend “for science” meets his equally sex obsessed sister Randi for the very first time. Both half-siblings are selfish and overbearing characters who dominate their relationships to an abusive degree. So, when they indulge their taboo thirsts it has explosive effects on the people around them. Raymond explores these unhealthy relationships and the lengths some will go to appease their partners.

The story revolves around two couples. Jason (played by Christopher Heard) and Claire (played by Stacey Roca) argue then make up (sort of) then argue again in their NYC apartment between their drug dealer’s cocaine deliveries. Meanwhile, in California, Martin (played by Benjamin Bauman) goes in way over his head when he tries to maintain a relationship with Randi (played by Sara Antkowiak). He wants to “take care of her,” but that proves difficult when she insistently drags him into violent, and sometimes embarrassing, sexual adventures. Jason tells Claire in passing that his mother had a daughter she gave up for adoption before having him, and this daughter is going to meet mom. What he fails to expect is for this sister to show up one day at his apartment.

Most of the play focuses on the toxicity of these couples’ relationships. Jason and Randi, without fail, get what they want in drugs or in sex. Their partners are only convenient so long as they give the siblings exactly what they want. The result is an unhealthy pattern where Jason and Randi are temporarily satisfied while Claire and Martin are denied the emotional support they so desperately want. The fact that Jason and Randi are related is only addressed in the second half of the show where their behavior quickly spirals into self-indulgent animalism.

Raymond’s attention to detail creates fascinating characters, and this strong cast enhances his writing wonderfully. Each actor is powerful on their own, but their skills shine through in how they work perfectly together as an ensemble. Their individual performances are so steeped in detail that their relationships become as nuanced as their characters. Put simply, bravo!

One detail I especially appreciated in this play was not only the choices people make to remain in toxic relationships, but the choices they make in denying themselves the opportunity to have healthy ones. There is a tender moment between Claire and Martin where we see just how good they would be for each other. They are genuinely interested in each other's lives and interests, and for a brief time they receive the emotional attention they have been denied the entire play.

With all of the energy poured into these relationships, there was still one that went over my head – Jason and Randi. I could understand their similarities, but so much time was spent setting up their other relationships I was hard pressed to understand their sexual attraction to each other. They satisfy their taboo tastes by manipulating other people; they seem to enjoy being dominant. How do they satisfy each other if one cannot always be in the dominant role of manipulator? Or does the attraction come from how they don’t have to manipulate each other to get what they want?

(Pretty Babies plays at 13th Street Repertory Theater at 50 West 13th Street through March 21, 2015. Performances are Thursdays at 8PM; Fridays and Saturdays at 9:30PM. Tickets are $18 general admission and are available at elsinorecounty.com.)