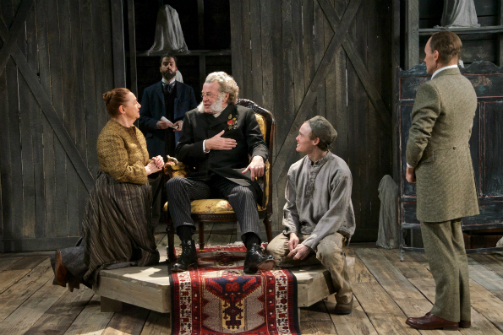 BOTTOM LINE: This wonderful piece explores the intermingling fears of lasting fame and obscurity with the moment Norway’s most famous author, Henrik Ibsen, sits to model for a bust by Norway’s most obscure portrait sculptor.

I remember reading Hedda Gabler in my first playwriting class and Lord, help me, if I remember what I read. Why, then, was I drawn to pay reverence to an author I hadn’t rightfully digested by seeing this play? I think the answer fuels the very core of this new world premiere work by Pulitzer Prize and Tony Award-winner Doug Wright (I Am My Own Wife). In Posterity, Wright comedically and poetically reveals the superficial qualities of well-meaning patrons who haven’t a clue to why they patronize. Henrik Ibsen (John Noble) is a household name in Oslo, whereas Norwegian sculptor Gustav Vigeland (Hamish Linklater) is less so. When Ibsen’s health begins to wane, artistic authorities commission a commemorative bust from Vigeland, the up-and-comer. However this momentous position is not immediately Vigeland’s until Ibsen himself approves. When the two meet, to their chagrin, the artists begin an unexpectedly transparent conversation about each other’s legacies and the fear they will fade into dust unfulfilled.

Posterity is a scrumptiously modern telling of 1901 Norway. Wright’s script and direction create an accessible look into Vigeland’s sculpture studio with the intriguing bustle of a busy workshop, all the more so with the prestigious commission. His devilishly witty dialogue is shared among the academics and lay people alike and the elevated barbs joyfully fly during the two-hour evening. Wright’s thoughtful script is generously humanized by a cast starring Hamish Linklater as Vigeland and John Noble as Ibsen. Linklater’s Vigeland is constantly frustrated, but exceedingly kind and sensitive. There is a moment toward the end of the play where I was melted by his understanding smile to Noble's Leer-like paragon.

Speaking of which, the moment Noble enters as the stoic and reposed Ibsen, he is perfection. In the wake of his sickness, this Ibsen will not be overwhelmed. Wright arduously keeps these two forces in the sculptor’s studio with some amazing scenes: blistering moments which scream each’s aversion to the other. The men’s palpable need for one another, though, creates an equally palpable charge in the audience, who audibly gasp and laugh throughout the play. This piece pleases the audience with its sensational tension, and also its well-placed humor.

This exciting work is supported by some amazing characters. I saw Henry Stram in The Public’s Antony and Cleopatra last year and was viscerally enthralled when he stepped onstage as Vigeland’s solicitor agent Sophus Larpent. Stram endows Larpent, a gopher by all means, with believable importance; his character is never devastated by his lack of power, in fact Stram makes martyrs of his man and though Larpent is long suffering at least he isn’t out of the loop.

This is the case for the rest of the cast because Vigeland’s studio resembles the equality of a commune wherein everyone is impressionable. Take Greta Bergstrom, hilariously played by Dale Soules, and Vigeland’s apprentice Anfinn Beck, genially offered by Mickey Theis, and their uncommon influence as subjects and friends to the studio. Soules and Theis open the play naked and motionless awaiting approval from Linklater’s fidgety sculptor; the opening seems to remark on their lasting friendship and indelible connection throughout the course of the play.

Intertwined with legs and rounded posture, the two create a knot of dependence which continues beyond the unexpected. They, in the wake of Ibsen’s mortal question, also consider their stamp on the earth with equally real stakes. Wright fashions their friendship unpretentiously, creating beauty out of their instant rapport with each other. With such a strong cast, the show’s exteriors frame the exhibition nicely too.

The play’s set design, by Derek McLane, further captures the tension between the finality of art’s product and the unknown importance that lasts afterward. Surrounding Viegland’s studio are a hundred covered busts, remnants of failed commissions; there to haunt or motivate Viegland. The lighting, by David Lander, is also inspired, with the centerpiece being the studio’s beautiful “natural” sun raining down through a large slanted window. The massive thing paints a Northern melancholy which speaks to the characters’ strident post as strong Anglo-Saxons, characterizing them as unfeeling and stoic. The play’s action always moves in or from the direction of the melancholy this light casts.

In the final moment of the play illuminated busts surround a controlled Ibsen. Viegland has left and Ibsen rings the bell which lets his doctor and wife know he needs help -- he's fatigued. After two hours of strong posturing, this final prostrate stance reveals why we really honor someone; in the moment of solitude the worthy person bows to their weakness, understanding it’s the weakness which endears them to us in the end. And at curtain Ibsen certainly becomes worthy of his famous bust. Posterity is a must see!