Created by Piehole with texts by Bernadette Mayer; Directed by Tara Ahmadinejad 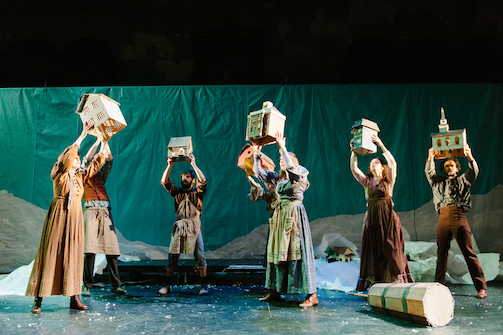 I’m from Michigan. While we all love to moan about the cold here in New York, I routinely swipe left on my weather app to see just how bad it can get. It’s generally reassuring and accompanied with a dose of unpleasant nostalgia. And life goes on. And this MTA “Cold Weather Plan” is no match for my previous four-wheel drive and economy snow scraper. My cold weather plan looked a lot like any other plan I may have had for that day, magnified ten fold by the fact that you gotta drive in it.

Cut to New York City and Piehole’s new devised performance Old Paper Houses. There’s a keen awareness of this classic New England weather troubles (not unlike that of my humble Midwest) located just mere miles from our cozy borders. And it’s a show that manages to both long for and be troubled by these long, rural winters. Yes the MTA in winter sucks and there’s something exciting about the prospect of a utopian farmland setup. But then there’s the cold.

Old Paper Houses ranges broadly in style from the vaguely dance-like meditation on winter in the first half to an overly cheerful, vaguely Waiting for Godot inspired, nineteenth-century farmstead (that kinda just looks like Williamsburg), to live feed video images of the modern day founding an ideal city. The stories are a kind of loose tryptich musing on the ideas of rural community dynamics when up against grave forces, like winter. In the third story, a town is formed around the farm as a central ideal source of life. Gradually, it’s pushed further and further to the periphery, discarded like paper, in favor of big-box stores and imposing banks. The set and these farms and banks, are understandably made entirely of paper and cardboard. There’s no props designer listed here so perhaps the credit for making the paper buildings should be given to scenic designer Kristen Robinson. There’s some expert gingerbread house real-ness going on with these meticulously made and well beat up little guys.

A camera, the view of which is projected onto the back wall, takes us on a virtual tour of this town. We’re put at a sort tiny-person view of the new world. It’s a device that feels at first exciting but becomes a bit tedious, sacrificing some exciting staging moments in favor of the video. It causes a lingering third half after an enticing beginning. I also wrestled with what exactly it was doing in a play framed around the idea of troubles in a New England winter. This grass covered farming town and t-shirt land feels of a different time. The pressures of the winter are seen strongly on the lethargy of the first and second portions complete with droll bean-from-tin-can eating and freezing farm work.

That said, there’s strong ensemble work in Old Paper Houses, with solid performances led by director Tara Ahmadinejad. Like any devised work, some rough edges are to be expected and honored for the texture they bring to the play. And the whole of Irondale’s church-like cavern is honored by scenic designer Robinson who offers us some intriguing surprises (stay tuned after the show for a fun cap to the evening of winter drudgery.)

Thanks to Piehole for a neat evening. And leaving the show and out onto the cold, slushy streets of our vast metropolis I can’t help but feel warmed a bit by Old Paper Houses.

(Old Paper Houses plays at The Irondale Center, 85 South Oxford Street in Brooklyn, through March 14, 2015. Performances are Thursdays through Saturdays at 7:30PM, with additional performances Wednesday March 11 at 7:30PM and Saturday March 14 at 3PM. Tickets are $18, $15 for students, and are available for purchase at brownpapertickets.com. For more information visit www.pieholed.com)