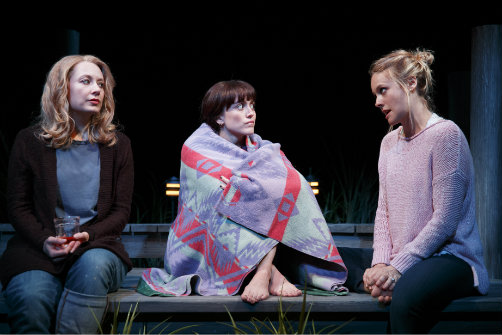 BOTTOM LINE: Melissa Ross puts her own spin on the dysfunctional family play in this engaging dramedy about three sisters.

Of Good Stock is a play written by a woman, directed by a woman, and starring three women. That shouldn't be something I would have to point out at the start of a review, but it's still rare enough on and off Broadway that it's always nice to see when it happens. Maybe one day this will be such a regular occurrence that it won't seem like such a big deal. We're definitely making progress, as this is actually the second production of a Melissa Ross play in New York this month. Her Nice Girl recently closed at Labyrinth Theater Company and was also a Theasy Best Bet.

Here Ross writes about a dysfunctional family—a familiar topic to anyone who has ever seen a play—but she makes it fresh. It's Jess's (Jennifer Mudge) birthday and she and her husband Fred (Kelly AuCoin) have invited her younger sisters to their house on Cape Cod to celebrate. Amy (Alicia Silverstone) is joined by her fiancé, Josh (Greg Keller). Celia (Heather Lind), the youngest at 31, brings a boyfriend (Hunter, played by Nate Miller) to meet the family for the first time in her life. Their father was a Pulitzer Prize-winning novelist who had many affairs and their mother died young and it's left them all pretty messed up, as is revealed the more we get to know them.

Mudge, Silverstone, and Lind are believable as sisters and the dialogue, which involves a lot of hilarious teasing, rings true. Ross writes how people actually talk, with characters speaking over each other. This is indicated in the script and director Lynne Meadow navigates it well, so it's not difficult to understand what is being said.

It is mostly Jess's story and Mudge captures her strength and fear. Silverstone is hilarious as self-centered Amy, but she has a monologue later in the play that is one of Of Good Stock's most moving moments. Lind also gets a lot of the funniest bits as the smart-ass youngest sister, but also shows her fragility. The male actors are just as strong, but their characters aren't as interesting, which becomes clear in one scene between Fred and Josh. It's the only scene without one of the sisters, and, through no fault of the actors, is the weakest in the play.

Santo Loquasto's detailed, rotating set is as much fun to watch as the action happening on it. And the kitchen appliances work, as in, there is actual cooking on stage, so make sure you don't see it on an empty stomach.