Written, Created and Directed by Tziporela 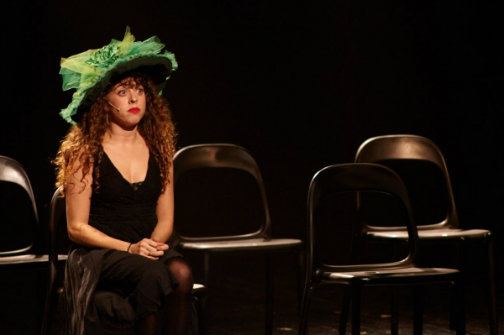 I enjoyed their play of unexpectedness, where one gesture does not need to connect to the next.  When an exuberant actor comes spinning on stage for no reason, she is actually setting up a romantic dinner for two, but you will be surprised how this turns into a contortionist’s foot-puppet show. Or, a familiar ensemble of judges from one of those mega-hit talent show turns out to be (spoiler alert) the performers themselves! The group does fantastically well with their comedic timing and creative break-neck-speed scene changes.

Odd Birdz also amplifies and explores awkward situations, makes political comments, and even occasionally mocks themselves. An “audience” member (Gal Friedman) suddenly calls out the show as “Off-Off-Off-Off Broadway,” turns out she is a “school teacher” and we will see some drama between her and her husband (Tomer Nahir Petluk and Gal Friedman). Some skits recur throughout the hour and a half show, some do not, but especially memorable are the love-hate singer-songwriter duo (Ben Perry and Naama Amit), the comedic graveyard mourning scene turned cat-fights (with Naama Amit and Efrat Aviv), and a heart-warming gender convention story told through T-shirts (Danny Isserless and Lotus Etrog).

The multifaceted cast is outstanding. I found myself wishing that some of these sketches could link in meaningful, storytelling ways; it would make this already superb show truly phenomenal. There is much to be savored even after the show when the troupe goes onto the street waving audience members, serenading with their songs.