No One Loves Us Here 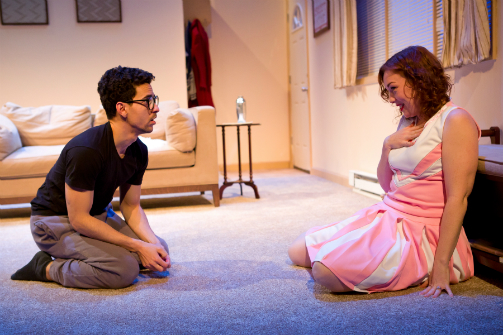 Anthony Michael Irizarry and Jessica Kitchens in No One Loves Us Here. Photo by Hunter Canning.

Depression, extra-marital affairs and recreational pain pills are routine for the Beaumonts, the superficially picture-perfect couple whose upscale home is the setting for Ross Howard’s black comedy No One Loves Us Here. When Washington, a 19 year-old burnout from the local video store comes knocking on their door, his visit sparks a series of dark twists that disrupts the faux-stability of the couple's upper-middle class existence. In a darkly entertaining production by New Light Theater Project, one can’t help but experience voyeuristic pleasure as years of repressed dysfunction unravel in the Beaumont living room.

Directed by Jerry Heymann, tension and discomfort abound from the first moments in the tightly-wound household. Daniel Beaumont (Christian Ryan) doesn’t hesitate to share his fantasy of murdering his wife with Washington (Anthony Michael Irizarry), who is relatively unfazed and willing to discuss the logistical challenges of such an idea. Intrigued and inspired, Daniel quickly invites Washington to move into the couple’s unused guest house, which ultimately irritates his mistress Amber (April Kidwell) and father-in-law (Dick Hughes) more than it does his own wife, the depressed and frequently intoxicated Mrs. Beaumont (Jessica Kitchens).

While the play doesn’t necessarily break ground in its bleakly cynical critique of white-collar dysfunction, constant twists -- some more unpredictable than others -- keep the audience on their toes and engaged in the crumbling lives of its characters. The cast delivers consistently solid performances, with Irizarry and Kitchens as particular standouts in more dynamic roles than the somewhat one-dimensional characters who surround them.

Urban Stages serves as a perfect home to the intimate play, with Brian Dudkiewicz’s believable set inviting audience members into the uncomfortable events of the neatly designed home. With a running time of approximately 100 minutes including an intermission, events move quickly and the climactic ending doesn’t disappoint. While the black comedy paints a bleak portrait, it certainly entertains and delivers surprise and humor along the way.

(No One Loves Us Here plays at Urban Stages, 259 West 30th Street, through February 7th, 2015. Performances are Thursdays, Fridays, and Saturdays at 8PM. Tickets are $15 in advance and $18 at the door and are available at brownpapertickets.com.)