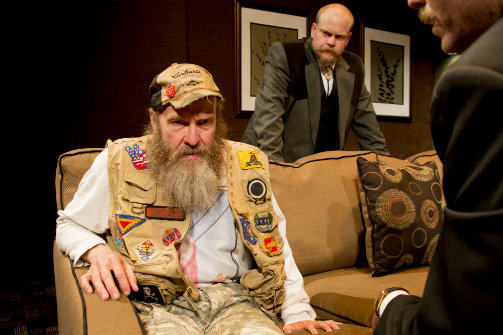 BOTTOM LINE: Despite some witty one-liners and a strong central performance, New Country feels more like an extended TV pilot than a play.

Here’s the pitch: In an upscale Nashville hotel room, a famous country star named Justin (David Lind) is getting married, and tonight is his bachelor party. He is surrounded by self-serving agents Paul and Chuck (Malcolm Madera and Jared Culverhouse respectively), his crazy Uncle Jim (Mark Roberts, who also wrote the play), his ex-with-a-vengeance Sharon (Sarah Lemp), and an obsessive gay bellhop named Ollie (Stephen Sheffer), who is Justin’s biggest fan.

Initially, the play seems to center on the self-absorbed Justin and his impending nuptials. However, it eventually shifts focus to Uncle Jim, who is dealing with his own lifelong regrets. Entering with a blowup doll in tow, Uncle Jim is the ultimate eccentric uncle—crude, unfiltered (as the play’s tagline suggests), and loaded with a crazy anecdote at the ready. Although Jim is chock full of hilarious one-liners, they hide a life of pain and regret.

Roberts’ portrayal of Uncle Jim is strong and specific. It is believable that this man has lived a long but unsatisfying life, and can make the audience laugh and cry with the flick of a wrist. The same, unfortunately, can’t be said for the play Roberts wrote.

From the very beginning, the play can’t shake the feeling of an extended TV pilot. Mr. Roberts has a long history in television, having been, among other things, the head writer of Two and a Half Men and the executive consultant for The Big Bang Theory. Roberts has an incredible gift for building and executing one-liners, but he hasn’t given the same dedication to the plot, which is mostly talk and little action, nor to his characters, with the exception of Uncle Jim.

Roberts also isn’t assisted by David Harwell, who has directed the company with broad strokes, leaving very little room for subtlety or nuance. Despite the talent of the actors, their performances are rendered one-note and borderline offensive because of Harwell’s direction. Agents Paul and Chuck are only slimy, Sharon is only angry, and Ollie, the gay bellhop, seems to exist for the sole reason to be laughed at. David Lind attempts to justify his character’s self-absorption, but his shallow role doesn’t give him much of a chance to do this. Only Uncle Jim comes across as a human being, having moments of comedy and pathos throughout, both through Roberts’ writing and performance.

Ultimately, New Country feels very muddled in its execution. It clearly wants to be about how people cope with disappointment, but lacks the pathos to make much of a statement on it. There is also a plot twist late in the play that comes out of nowhere, and is barely explored after its reveal.

There’s a line Uncle Jim says: “I hate new country. I prefer old country.” He is referring to the shift of country music from past to present, but also to how much he prefers his old life compared with his current one. In that moment, I imagined what this play would be if it was a solo piece featuring Uncle Jim discussing his crazy antics and disappointing life. I felt that would have been a much more interesting, poignant, and funnier play than New Country.