Tickets are no longer available as the production has ended its run. 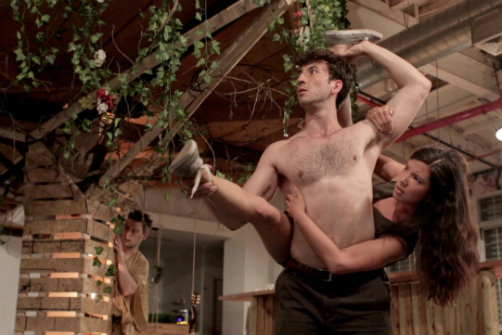 Dominique Brillon and Marek Pavlovski in A Midsummer Night's Dream.

BOTTOM LINE: Brimming with youthful energy, Dream is full of the summer spirit.

“Stir up the Athenian youth to merriment!” exclaims Puck, as the audience settles into their oversized pillows and cozy floor seating at the charmingly industrial Redwood Studio space along the Gowanus Canal. It’s a felicitous invitation into a celebration of summery innocence and playfulness in observation of the Summer Solstice, whimsically helmed by director Christopher Hirsh and conceived by Alice Allemano (who also brings a graceful Hippolyta and Titania to the stage).

The production pokes us right in the school’s-out nostalgia of mid-June, filling the space with DIY treehouses  and swings and overgrown vines that satisfy the longing for childhood adventure and optimism aroused by the season. Hirsh’s Midsummer captures the hot-blooded delirium of young love, forgoing the magical luster often associated with Shakespeare’s forest of fairies for a simpler incarnation where the performers are at the forefront. In the spirit of the longest day of the year, the Redwood warehouse lights remain on throughout the evening, washing both performers and audience in a midsummer warmth that encourages a communion between the entire room.

In this context, with exits and changes exposed, the cast of 13 come through with strong and balanced performances. Alden Ford’s smug and easy Bottom brings energy and novelty to well-trod text, and he is well matched with Alex Dunbar’s dim-witted Flute -- their Pyramus and Thisby is a highpoint of the performance. Under musical direction by Julia Anrather (wearing a second hat as Helena), a handful of “dulcet and harmonious” performances backdrop the action, lending a cheerfully naturalistic and unpolished quality to the production. A canon of classic love song one-liners heralds the first entrance of the rude mechanicals and underscores the working-class charm of the play.

Fulfilling it’s never-ending-summer aesthetic, the conclusion of the performance segues directly into an open-bar after party where Japanese electro-rock outfit Mothercoat provides the appropriately jubilant soundtrack to the dancing and revelry that follows (producers Foxwolf Productions have arranged a different band for each performance). Cast and audience gather on the dance floor and in the treehouse lounges above, toasting the changing of seasons, and sharing in the contagious “merriment” drummed up by Puck.

The marriage of music and theater is no new conception, but this particular manifestation makes the idea feel novel, conflating performance mediums to make for a hip and welcoming event. One can only hope the summer lives up to such a lively ringing in.