The Lighthouse Invites the Storm 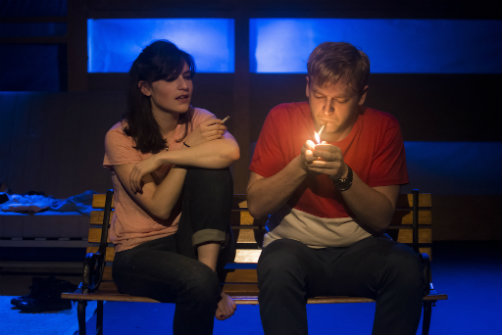 Liba Vaynberg and Curry Whitmire in The Lighthouse Invites the Storm. Photo by Derek Miller.

BOTTOM LINE: This is a show worth seeing thanks to a script rife with clever dialogue and emotionally charged performances.

The saying, “You never forget your first,” is both declared by the characters in the play The Lighthouse Invites the Storm and is also proven true by their behavior. At a summer camp designed to give a pre-college experience to 16 and 17-year olds, Irene (Liba Vaynberg) and Quinn (Curry Whitmire) meet and have the sort of intense, excited chemistry that teens do when experiencing these feelings for the first time. There is lots of electrically-charged repartee and nights spent awake, smoking and contemplating their life plans.

The play’s title refers to a line from a poem by Malcom Lowry, a poet whose life Quinn desires to emulate, as he lugs about his hefty biography as a way to find direction in all his adolescent confusion. There is just one hitch: Irene has a supremely douche-baggy 22-year old boyfriend named Greg whose palpable awfulness as a human being makes one question why the intellectual Irene would be so attached.

In the opening scene, Irene and Quinn lie together on a futon and Irene informs Quinn that he can have sex with her, but he cannot kiss her on the mouth. Irene feels that kissing someone other than her boyfriend would be a bigger betrayal than having sex with someone else. The depravity and cynicism expressed by Irene in this scene offer the only sort of explanation as to why Irene would rather be with someone she clearly doesn’t love.

Adding a humorous subplot to these two conflicted lovebirds are nerdy Jay (Debargo Sanyal) and Nicole (Alli Trussell). Jay has designs for Nicole (he mistakes her constant smiling as an interest in him). Nicole meanwhile has her eyes on Quinn and Irene tries to push Nicole on him as a way to escape her feelings.

The second act of the play takes place 16 years later. Nerdy Jay has become a married tech millionaire whose money attracts lots of “side pieces.” Quinn has fulfilled his earnest teenage dream of being a writer, while Irene has not turned out quite as lucky. Due to getting pregnant at a young age by Greg, she had to drop out of college. While she occasionally gets acting work it’s not enough to pay the bills. Despite being married, Quinn feels compelled to reunite with Irene and chase the love he never was able to fulfill as a teenager.

Much of the strength of this production lies in the performances. Sanyal once again (as he seems to be in everything I've seen recently) adds much to the show with his knack for playing humorously strange characters. Vaynberg, meanwhile, makes her character’s cynicism and constant snarkiness seem like a mask hiding her true vulnerability, rather than turning her into a cartoon. Whitmire manages to convincingly become both a doe-eyed teenager and a jaded thirty-something. Whitmire and Vaynberg in particular give emotional and nuanced performances that show their characters’ conflict about exposing their vulnerabilities to finally get what they want or keeping their walls up and staying miserable. The minimalist set is also evocative of a variety of settings thanks in part to sound designer Anthony Banda.

Playwright Josh Drimmer has an ear for the kind of tense dialogue that erupts when intense sexual chemistry ignites between two young people who are not sure whether to run away from it or towards it. His thirty-something characters also have articulate, convincing jadedness and confusion at not getting what they wanted, or not being happy after getting what they thought they wanted. However, as is, the script is quite long and seems to run on in places. Irene and Quinn’s reunion in a trendy New York hotel could be cut down and focus more on the conflicts; as is it meanders and the dialogue does not always add to developing the characters or the plot.

Nonetheless, the strong characters and performances that comprise The Lighthouse Invites the Storm will have you questioning your own life choices and reflecting on those that you let slip between the cracks before all was said and done.

(The Lighthouse Invites the Storm plays at 21-28 45th Road Long Island City, through May 17, 2015. Remaining performances are Friday and Saturday at 8PM, and Sunday at 3PM. Tickets are $15 and are available at lighthousestc.brownpapertickets.com or by calling 800-838-3006.)