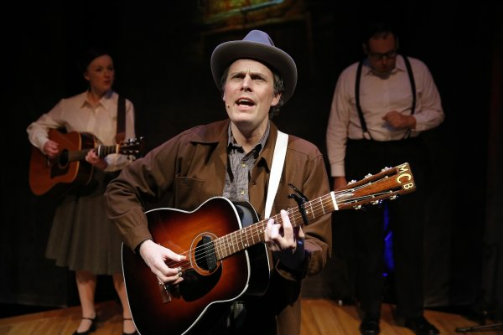 BOTTOM LINE: Let's all sing together as this musical revue takes us through the history of American folk.

After wandering and socializing with patrons, family, and friends, creating a comfortable and casual vibe, the cast of singer/musicians emerges from the audience, coming together to sing the haunting Christian hymn, "How Can I Keep From Singing?" The song of hope in times of trouble—popularized by folk singer and activist Pete Seeger—brings with it a sense of nostalgia and familiarity. As the show continues and songs of yesteryear are heard, that Seeger song becomes the theme of the evening: Why do they keep from singing? Indeed, this is the main problem for Lonesome Traveler: when the singing stops. What keeps them from singing is a clunky book seemingly written for an audience of theme-park goers. Maybe that's the point—parts of New York City are almost a theme park after all, especially an Off Broadway show made for aging white liberals who love a good sing-along.

Now, don't get me wrong, I love folk music. Its origins and stories are true Americana. The music of Lonesome Traveler does its best to present the trajectory of folk: the stories, the worries, and the people who sing them. The singer/musicians we hear are incredible. Their voices are pure and honest and the musicianship is spot-on. The music direction by Trevor Wheetman (with original musical direction and musical arrangements by Dan Wheetman) is the highlight of this show.

For me, the songs bring back memories of road trips and lazy Saturdays. The themes of peace, love, community, and change are strong. These songs helped to create who I am as a person. I'm sure other people have other memories that run deep. At times, memories have a way of making you feel less lonesome. We all seem to be lonesome travelers brought together. This is why this show seems so appealing on paper.

Guiding us through the first act is a Pete Seeger character (played sweetly by Justin Flagg) as well as "The Muse" (powerfully voiced by Jennifer Leigh Warren) who both work as narrators. Folk music has many influences, from all different walks of life. The connecting force is the every-person: the lowly, the down-and-out, the minority, the voiceless. We hear the African-American influence, Woody Guthrie's communist/for-the-workers/for-the-people's voice (played with fantastic ease and deep connection by Matty Charles), and the influence of Christian scripture.

Unfortunately, Lonesome Traveler falls flat with mindless chatter and hints of self-awareness about its own book. "Hey! If we make jokes about it and tell the audience we are aware of its flaws, it'll make it easier." It seems as if the director and writer of the show, James O'Neil, thought this was enough to get by—toss some awkward transitions and facts in-between songs and hope for the best. The show seems to get in its own way, diminishing the power it can have. These singer-songwriters are activists. The lyrics written are powerful enough. But Lonesome Traveler is anything but active; it seems comfortable in its passivity.

The second act could be from a different show, more of a concert. We hear Joan Baez; Peter, Paul, and Mary; The Kingston Trio; and others singing beautiful renditions of "Tom Dooley," "Flora," and "Early Morning Rain." The music is sweet, almost with a lullaby quality. Then we come to the rallying cry of "We Shall Overcome," an anthem of the Civil Rights Movement. "Yes! We're going to get into something powerful!" Alas, no, we just move from a photo of a man with "VOTE" painted on his face into a projection of a shadowy guitar player strumming and a crowd cheering at the 1965 Newport Folk Festival. And this is where the show starts to end.

The goal, I think, is to prove the influence of early folk musicians on today's artists, and it culminates quickly with songwriters and bands projected on screens as a live trio rocks out with Bob Dylan's "It's All Over Now Baby Blue." And that's about it. Toss in a wee bit of thematic "How Can I Keep From Singing?" and top it off with a sweeter-than-cherry-pie "This Little Light of Mine." The end.

It's disappointing because I expected so much more. There are so many examples of activist songwriting all across America: the voices that compel us to take action. Each time, just when I thought things were getting juicy, it turned into a sing-along again, which surprised me since this music was written for a reason, and the writer-director knew this.

There is a quote from Pete Seeger in the program: "And when one person taps out a beat while another leads into the melody; or when three people discover a harmony they never knew existed; or when a crowd joins in on a chorus as though to raise the ceiling a few feet higher; then they also know there is hope for the world." The show takes this quote too literally. We are constantly welcomed to sing, to "raise our voices" time and time again. The only problem is that we don't know why. It is all for nostalgia. You know, maybe that's the goal. Not to be heard. No voice of the people fighting against the wrongs of the world. No chorus raising the ceiling a few feet higher. No, it's for nostalgia. The singing is done in a void, which is too bad. The voices are so beautiful.