Let the Right One In

By Jack Thorne; Directed by John Tiffany
Produced by the National Theatre of Scotland 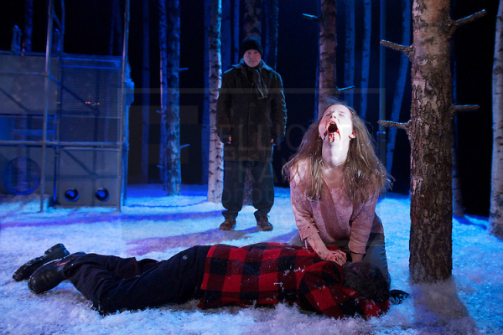 Rebecca Benson in Let the Right One In. Photo by Elliot Franks.

Let’s get this out of the way: yes, it’s based on a vampire movie. But it’s not just about vampires.

Described as a “brutal and tender” vampire myth, the National Theatre of Scotland’s production of Let the Right One In has arrived in New York. This beautiful production, helmed by Tony Award winner John Tiffany and Olivier Award winner Steven Hoggett (both of Black Watch and Broadway’s Once and The Glass Menagerie), makes a strong argument for genre fearlessness in theater. Yes, this is based on a horror movie, but it’s really a sweet and heartbreaking love story, as well as a tale of adolescence and its own horrors.

Let the Right One In is based on the Swedish film by John Adjvide Lindqvist, and was adapted for the stage by Jack Thorne. The lead character, and the star of the production, is Eli, played brilliantly by Rebecca Benson (who has played this role since the production’s origins in Scotland.) She is at once, a young girl, and she’s not. She’s supernatural, feral, young and old all at once. Benson has created a vocal affectation that manages to encompass all of that. She is immensely likeable, wide-eyed, and compelling in all scenes.

Eli becomes friends with her new next door neighbor, Oskar. Oskar is more of a typical adolescent boy. Cristian Ortega embodies him with the requisite vulnerability and fear of his age, and he and Benson have a warm and appealing chemistry. He’s from a broken home and gets bullied by bigger kids in school. He and Eli find a kinship in each other: they’re both a little lost.

Anyone who has seen the work of Tiffany and Hoggett in the past may be nodding their heads at this point. Loneliness and desperate search for companionship and meaning? Call John Tiffany and Steven Hoggett. Right One also showcases some of Hoggett’s best and most naturalistic movement to date. The movements are all sharp and the intention is clear, but it’s not overwhelming, and perfectly fits in with the atmosphere and aesthetic that Tiffany and set/costume designer Christine Jones have created.

All of the ensemble actors give strong performances, notably Graeme Dalling and Andrew Fraser, but this is really Eli and Oskar’s story.

Eli and Oskar develop a close friendship, eventually “going out” before Oskar finds out what she really is. In the meantime, people in the town are being mysteriously murdered. The way the story unfolds, it’s not really a mystery. We know who is committing the murders from the start; we just have to wait for Oskar and the town to catch up.

Regarding the murders, the special effects design is by Jeremy Chernick. There’s blood and violence in many different, stunningly executed ways. (You can always close your eyes if the sight of blood is too much for you. It’ll be over in a minute.)

Right One is not lacking in suspense or terror, aided by the work of sound designer Gareth Fry, composer Olafur Arnaulds and lighting designer Chahine Yavroyan. There are certainly creepy effects, as well as a moment when I literally jumped up from my seat -- I don’t mean to downplay the scary aspect. But the true beauty in Right One lies in the story and the friendship and love of Eli and Oskar.