Off Off Broadway, Play
Runs through 11.13.15
Brian and Simone's Apartment, 28 Scott Avenue, Brooklyn 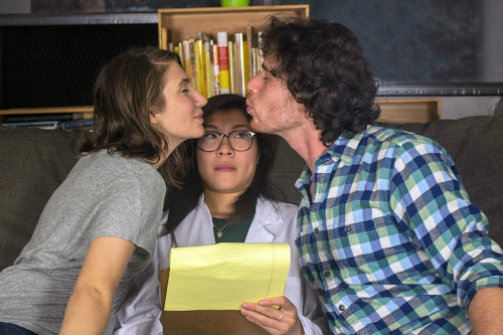 BOTTOM LINE: The immersive staging of this production and its unusual subject matter make it a must-see for Off Off Broadway theater-goers.

The question of how we change when under constant supervision is at the heart of Crashbox Theater’s new production Kitchen Sink Experiment(s), an unusually staged production, in which a small handful of audience members sit inside an apartment in an actual residential building. In the apartment reside Brian (Matthew K. Davis ) and Simone (Lena Hudson), a couple in their late twenties/early thirties who appear to have recently begun to abandon their bohemian ambitions in order to live a more financially stable existence (the oddly structured “apartment” where they reside reflects their unconventional and artistic desires). In order to pay the bills, Brian has put his interest in being a visual artist aside in order to work nights doing technical work at a television station, whereas Simone works days as a real estate assistant. In the interest of making some extra cash, the two decide to allow a “scientist” from “the university” to come into their apartment for a week to observe how they live.

The Scientist (Rachel Lin) arrives in their apartment early one morning with only a few minimal explanations and instructions, telling them that the university mailed them a pamphlet to answer all of their questions. This seemingly superhuman being sets herself up on a stool in the corner of their apartment furtively scribbling notes, while seemingly going without sleep or food (aside from a small baggie of peanuts she picks at while listening to the couple copulate) for days on end. During the week the couple mostly only cross paths as Leah groggily leaves for work and Brian sluggishly returns home from a night spent slaving away. Any attempt Brian and Leah make to interact with the scientist is shot down.

As Brian and Simone spend more and more time apart from each other, they grow lonesome and look to the scientist for comfort. Simone begs the scientist to sit at the kitchen table with her and eat ice cream, but she stoically refuses, not wanting to engage. The two also become obsessed with knowing how the scientist perceives them. Brian asks her if he is in fact likable. When she refuses to respond, he demands that she wink if the answer is yes. Simone worries about who she has become and how others will perceive her. As adults who have had to abandon their true ambitions in favor of pragmatism, Brian and Simone wonder who they really are in the eyes of the ever-judgmental world.

Kitchen Sink Experiment(s) is a unique and memorable theater experience, due in part to the immersive experience of sitting in an actual apartment as opposed to sitting in front of a stage. Brian and Simone prepare and eat numerous meals in front of the audience; this and the authentic clutter (along with convincing acting) make it feel as though you are spying on a real Brooklyn couple, instead of sitting in an audience. Under the direction of Andrew J. Scoville, Matthew K. Davis and Lena Hudson give emotional and nuanced performances that capture the frustrations felt by the characters. This production is certainly one you will remember long after you have left the theater.

(Kitchen Sink Experiment(s) plays at Brian and Simone's apartment, 28 Scott Avenue in Bushwick, Brooklyn, through November 13, 2015. Performances are Tuesdays through Sundays at 8PM. Tickets are $28 and are available at www.crashboxtickets.com or by calling 800.838.3006.)

Kitchen Sink Experiment(s) is written by Colby Day and directed by Andrew J. Scoville. It is produced by Crashbox Theater. Production Design is by Joel Soren, and the stage manager is Alannah O'Hagan. The cast is Lena Hudson, Matthew K. Davis, and Rachel Lin