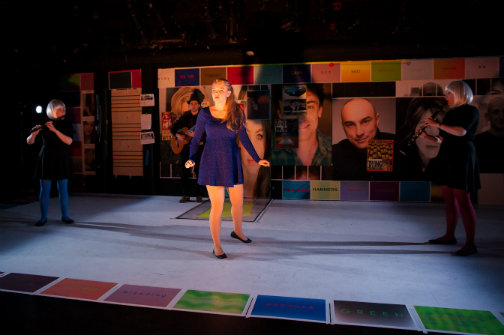 Kentucky Cantata is a fictional story about a young woman named Carolyn from Monkeys Eyebrow, Kentucky (this is a real city). Her mother Dora (performed by Marta Reiman) has been worried and warns Carolyn (Hayley Treider) not to make the trip to the dangerous city. Dora dreams of her daughter working in a steady, stable occupation in rural Kentucky, but Carolyn is determined to leave. With the support of her father Larry (performed by Dan Patrick Brady), she sets out to New York City alone, not knowing that her life will soon come to a distressing halt.

The opening of the play describes a brutal rape scene, where the entire ensemble (including musicians) suggests the ominous event through body language, movements, and sounds. The scene sizzles with a disturbing sexual energy. Musicians intertwine between the actors, and the sounds/melodic lines punctuate the actors' speech. The score (performed by three musicians, composed by Ashleé Miller who also plays the clarinet) is sparse and hollow. Guitarist Chris Funke performs gracefully and with subtle charm in a scene interacting with Dora's sultry monologue.

The story unfolds non-chronologically, with a few long, bare monologues that depict detailed portraits of individual characters. Tony Naumovski does a great job with the difficult role of Kareem the taxi driver, a torn-hearted, lonesome visitor who is illegally staying in the country. As Carolyn, Hayley Treider performs well with choreographic movements as a young and distressed soul, moving between the physical world and the non-physical. Playwright Paul David Young's poetic writing moves comfortably between the psychological world of the characters (where a character speaks directly to the audience) and the traditional dialogue between a pair of actors at a specific time and place. The play is directed with nuanced details by Kathy Gail MacGowan, with movement consultation by Kristin Swiat and Marjorie Folkman.