$10 for a single episode 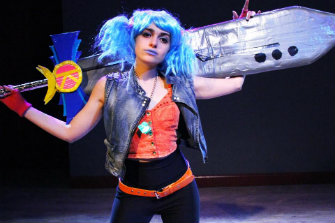 BOTTOM LINE: For anime fans or anyone who just enjoys general joy and laughter, Kapow-i GoGo is a mystical dragon-granted wish come true.

Kapow-i GoGo is an epic action comedy serial drenched in anime and video tropes. If you are learning about it for the first time while reading this, you have already missed Part 1 of its three-part saga. I am sorry for your loss. I will do my part to catch you up to the plot so that you will be ready to enjoy Parts 2 and 3 in the next two weeks:

Kapow-i GoGo (Madeleine Bundy) is just your average blue-haired fourteen-year-old girl who wants to become the greatest fighter in the world. However, on her way to the World’s Martial Arts Tournament, she gets sucked into a mission to find all seven of the legendary Hydra Crystals to unleash a mystical dragon who will give her three wishes. With the help/hindrance of her thirty-two year old younger brother Hiccup (Mike Axelrod), blind, drunken martial arts master Master Masterwhiskies (Hank Lin) and a mysterious hooded stranger (Keola Simpson) who may or may not be Kapow-i’s long-lost legendary fighter father, Kapow-i defeats a terrible cave monster, saves a mostly-peaceful tribe of forest creatures from the evil Ultra Corporation, outwits the troublesome troublemaking of Team Trouble (Karston Otto and show creator Matt Cox), and saves the world from space demon Xar Xar Zuu (Christina Pitter)! What a great way to end a day; it almost does not matter that the mysterious hooded stranger gets killed just after revealing that he is Kapow-i’s long-lost legendary fighter father, or that her brother became possessed by Xar Xar Zuu and fell down a bottomless pit, or that the beautiful woodland sprite (Tara Pacheco) Kapow-i loves has no memory of their relationship. It doesn't matter. Everything is going to be okay for Kapow-i now that she is the world’s greatest fighter and has a gigantic sword. Oh, wait. Kapow-i’s Aunt O’Wynn did get her heart ripped out, too. I guess things are only starting to get bad for Kapow-i. END PART ONE.

Coming off its successful run in #serials@theflea, Kapow-i GoGo has found a perfect home at the People’s Improv Theater. Buoyed by a comedy-friendly, booze-enabled audience (there are cup-holders in the seats is all I'm saying) Kapow-i GoGo revels in its over-the-top anarchic energy. Cox’s script accurately and hilariously spoofs and celebrates the anime clichés exercised by Dragonball Z, Yu-gi-oh, Pokémon and other seizure-friendly staples of the after-school viewing genre. Part 1 is pure, colorful silliness that refuses to take a single thing seriously. While there is foreshadowing that parts 2 and 3 will go down a darker, more dystopian path, I doubt that will hinder the show’s outrageousness or humor.

An incredibly game cast, many of them members of The Flea’s resident acting ensemble, The Bats, meet the challenges presented by a show with such high energy expectations. Bundy tempers Kapow-i’s high-pitched anime action heroine persona with a sweet teenage vulnerability. Lin gives a surprising nimble performance as a classic dirty old man mentor (kudos to Cox and Lin for showing restraint where a portrayal of an old man/young girl comedic relationship could have gone horribly wrong). Cox and Otto have a great dynamic as the villainous Team Trouble. Simpson, as the stalwart Swiftfist GoGo and patriarch of the antlered forest tribe has a nice, understated energy that perfectly offsets the craziness of the entire show.

Every now and then I will see a show so good, so perfectly attuned to my own weird aesthetic that I will actually become angry that someone created and executed the concept first. It’s like someone didn’t invite you to your own birthday party. Kapow-i GoGo is such a show, and I am furious. How dare this show be a perfect example of my dream show and exist without my involvement? Who the hell does this show think it is, having fun with giant swords and dragons and fight choreography and only letting me watch from the sidelines? Eff this show for being a 100 miles-per-hour roller coaster of fun and leaving me only to talk about how awesome it is. It’s so good. Congratulations, Kapow-i GoGo for being good. You jerk.