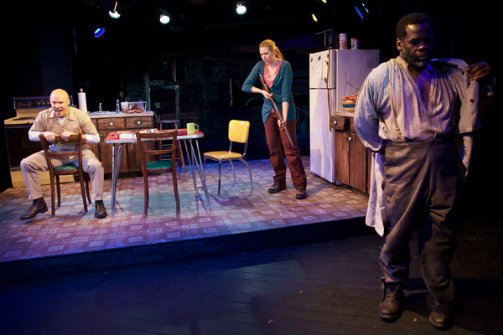 The Insurgents, by Lucy Thurber, at Labyrinth Theater Company.

BOTTOM LINE: A young woman returns home from college to rural New Hampshire to reconcile with her father, brother, and the ghosts of America’s insurgents.

Most plays aim to entertain you. They pack layer upon layer of plot like wedding cake to engage your most basic senses. Don’t get me wrong, this kind of fluff is fine, especially when all you want to do is turn your mind off and enjoy a nice evening out. Suspension of disbelief: ENGAGE! But sometimes you encounter a play jam-packed with ideas, teasing you with the very basics of a plot just in case you need something to rely on -- a safety blanket of story -- while the playwright engages deeper, more challenging aspects of our minds. These plays often confront us with our culture’s shared history -- such as slavery -- which most people would like to forget. These plays dare to ask difficult questions and the questions linger once the final bow is taken and all you are left with is yourself. Lucy Thurber’s The Insurgents is such a play.

Here’s the seemingly simple plot: Sally Wright (Cassie Beck) returns to her rural home from college after losing an athletic scholarship despite the support she receives from her fast-talking coach (April Matthis), and also a brief -- but memorable -- stint working with a chef named Jonathan (Craig ‘muMs’ Grant) in Detroit. Armed with a shotgun and history books, Sally confronts her beer guzzling, blue-collar father Peter (Dan Butler), and her brother Jimmy (Aaron Roman Weiner). But throughout her stay at home, Sally has lengthy conversations with historical insurgents of the past: John Brown (Butler), Harriet Tubman (Matthis), Nat Turner (Grant) and Timothy McVeigh (Weiner). These conversations spark such intensity within Sally that we wonder just what exactly she plans to do with that shotgun.

The ensemble is pitch perfect here. The doubling works to the advantage of the play’s dichotomy of past and present and its impact upon our culture. Brown’s passionate love and plea for America resonates a sad irony while watching his Peter guzzle another beer down. Matthis’s hilariously contemporary coach is undercut by Tubman’s somber but necessary recollections of her struggle and her willingness to use violence to save lives. Grant’s deeply disturbing recount of the horrors which were inflicted upon his body after death plagues you even while you watch his charming turn as Jonathan. And Weiner’s Jimmy has a familiar sense of aggression and terror as his McVeigh; the only difference being McVeigh was intelligent, calculated and chillingly relatable. And Cassie Beck shines as a emotionally haunted young woman desperately trying to piece together these relics of America’s history with her own life.

Director Jackson Gay stages the show in a fluid circle, the ghosts silently rotating in, out and around the kitchen sink set where Sally struggles in conversation after conversation. And what thrilling conversations! Thurber and Gay allow characters to speak at length with the pacing of a James Bond movie as directed by Ingmar Bergman. When I saw the performance, there was a great young, diverse audience (something that should be seen in more theatres in New York) completely engaged and enthusiastic about it. During a particularly inspiring speech by Tubman, a group of girls snapped in appreciation, and I would have too if I could snap.