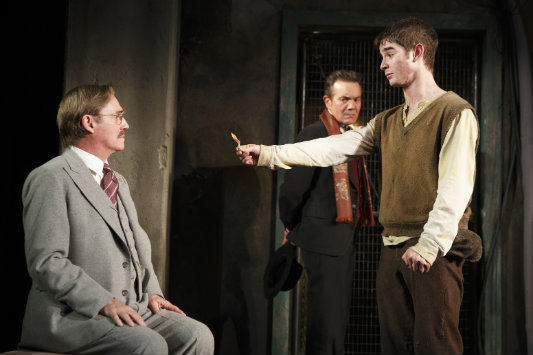 BOTTOM LINE: Arthur Miller’s 1964 examination of the Holocaust as it played out in France is, like all of his best work, a tragedy you can’t look away from.

Arthur Miller would have turned 100 this year. Sadly, he only made it to age 90, passing away in 2005. In honor of his centenary, the current stage season here in New York is chock full of Miller, with A View from the Bridge currently running on Broadway and The Crucible scheduled for spring (both, weirdly, are London transplants directed by the suddenly ubiquitous Ivo van Hove). These two plays are from Miller’s most commercially successful period, the late 1940s through the early 1950s; however, he was still writing up until the year before his death. Why theatres, or audiences, so heavily prefer his earlier works is a matter of debate, but for those who want to experience one of his “later” plays, there is Signature Theatre’s current production of Incident at Vichy, originally staged in 1964. It may not be one of Miller’s “greatest hits,” but it is Miller through and through.

The action of Incident at Vichy takes place entirely within the walls of a makeshift detention center in the region of France that was ostensibly “free” following the German invasion in 1940 (the German army occupied the north and west of the country while a government approved by the Nazis controlled the south; those who did not accept this arrangement formed the French Resistance). A diverse group of Frenchmen have been picked up by the authorities and are waiting to be questioned. They include an impatient businessman, a scruffy artist, a nervous teenager, a haughty actor, and a Vienna-trained psychiatrist, among others. On the surface, they seem to have nothing particular in common, but it soon becomes clear that most, if not all of them are carrying false papers in order to hide their ethnic origins.

There is also an Austrian expatriate among the detainees, who has fled his native country despite belonging to a noble family with an impeccable bloodline. Asked why someone with nothing to fear from the Nazis would make such a move, he explains that he could no longer bear their “vulgarity…their adoration of dreadful art; and grocery clerks in uniform telling the orchestra what music it may not play. Vulgarity can be enough to send a man out of his country.” The presence of this outsider arouses varying emotions among the Frenchmen, ranging from admiration to contempt. It also forces them to reckon with reality: despite their attempts at optimism, they are now in the custody of the German military, with the collaboration of French police—almost certainly a predicament from which escape is impossible.

A large, all-male cast plays out this incredibly tense drama. Richard Thomas, the television and stage veteran who made his name as a teen on The Waltons, is superb as von Berg, the Austrian prince. Also excellent are Jonny Orsini as Lebeau, the painter who laments not having left France altogether when he had the chance, and Derek Smith as Monceau, the actor who can’t believe that the same Germans who applauded him on stage would want him dead. Under the steady direction of Michael Wilson, all of the detained men are made full and distinct characters, underscoring the irony that despite their individuality, all are condemned based on a single random criterion. But that is the world we now live in, says the German army officer assigned, clearly against his will, to this hateful project: “There are no persons anymore,” he declares.

Incident at Vichy was Miller’s first attempt to address the Holocaust on stage, and he would return to the subject more than once. Nearly 20 years after the end of World War II, audiences were still not ready for it. Perhaps it was because its tone is so bleak and unsentimental (unlike, for example, the stage version of The Diary of Anne Frank); perhaps it was because the full extent of France’s collaboration with the Germans on the Final Solution was still largely unknown. In any case, Signature has provided us an opportunity to revisit this complex and poetic work, sandwiched between the Broadway “greatest hits.” It’s a worthy addition to the centenary season of Miller.