Important Hats of the Twentieth Century 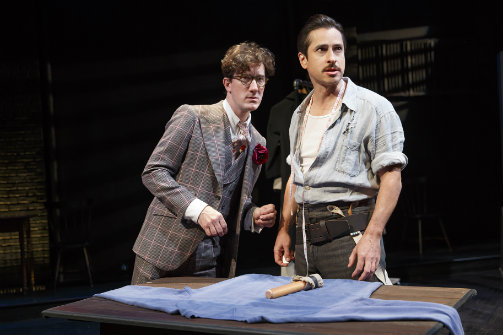 Carson Elrod and Matthew Saldivar in Important Hats of the Twentieth Century. Photo by Joan Marcus.

BOTTOM LINE: Though this play is unapologetically over-the-top, it will leave you thinking as well as laughing.

“Buckle your seat belts” would have been a useful warning for Nick Jones’ outrageous new play Important Hats of the Twentieth Century. Fashion designer Sam Greevy (a splendid Carson Elrod) is at the top of his game as one of the hottest designers in New York City in 1937. A secret affair with the dashing and charismatic reporter T.B. Doyle (a dashing and charismatic John Behlmann) helps Greevy get the best press to keep him ascending the ladder of fashion stardom. Everything is going right. That is until his rival Paul Roms (a deliciously hysterical Matthew Saldivar) debuts a groundbreaking new design: the sweatshirt. It is unlike anything anyone has seen before; made for both genders, loose fitting, and...comfortable!

It isn’t a coincidence that while Paul Roms is debuting more new items like the “track suit” and “skater pants,” T.B. Doyle is investigating a report about a scientist’s stolen machine. The nature of this machine is a mystery to everyone, but could it be Paul Roms’ secret to his brilliant new fashion trends that oddly resemble those of 1998?

The team of Important Hats... has triumphed in creating the specific world(s) in which the play takes place. Through a successful collaboration between actors, designers, and director the audience is welcomed into New York in the 1930s and more. Timothy R. Mackabee’s set is as simple as they come, but impressive versatility and a little imagination allow it to transform the small theatre at New York City Center into new location after new location. Jason Lyons lighting perfectly grasps the nostalgia of old-time detective films while making drastically different times and places very clear. Palmer Hefferan’s sound design and original music build suspense and create wonderfully specific soundscapes. Jennifer Moeller’s costumes hysterically harness the 1930s, the 1990s, and even some well-endowed cave monsters. This piece is a prime example of a cohesive design team.

I don’t think the ensemble of excellent actors could be having more fun on stage together. Most of them perform as more than one character: a challenging but particularly fun task. They are truly playing, which makes a fun experience for the audience. Jones’ script has a wonderful feeling of improvisation that embraces accidents, allowing the skilled actors to really dive into the outrageous comedy of the piece. In the end it is the mastermind of director Moritz Von Stuelpnagel, that brings this all-over-the-place comedy together while remaining surprisingly simple and focused.

Important Hats... never stops surprising. When Paul Roms’ “method of research” starts creating death balls in the sky, the fight for fashion quickly turns to a fight to save the world. Jones’ has expertly crafted a laugh-out-loud comedy (there are often times when the action stops for audience laughter), while digging deep with important commentary on our world today. From one liners about the “stupidity of science,” to circumstances that question the priorities with which we live our lives, Jones, with the help of a supremely talented team, has made the thought-provoking ideas just as important as the laughs.

(Important Hats of The Twentieth Century plays at New York City Center's Stage II, 131 West 55th Street, through December 13, 2015. The show runs two hours with one intermission. Performances are Tuesdays through Fridays at 7:30, Saturdays at 2:30 and 7:30, and Sundays at 2:30. On Wednesdays in December there are also matinees at 2:30. There is no performance on Thanksgiving Day. Tickets are $30 and are available at www.nycitycenter.org or by calling 212.581.1212. For more information visit manhattantheatreclub.com.)

Important Hats Of The Twentieth Century is written by Nick Jones and directed by Moritz Von Stuelpnagel. It is produced by Manhattan Theatre Club. Set Design is by Timothy R. Mackabee. Costume Design is by Jennifer Moeller. Lighting Design is by Jason Lyons. Original Music and Sound Design is by Palmer Hefferan. Hair and Wig Design is by Leah J. Loukas. Fight Direction is by Robert Westley. Production Stage Manager is Kelly Gillespie.