I'm Gonna Pray For You So Hard 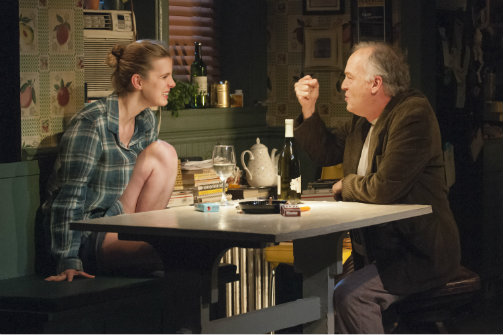 Betty Gilpin and Reed Birney in I'm Gonna Pray For You So Hard. Photo by Ahron Foster.

BOTTOM LINE: The father-daughter tension is as thick and alluring as the cigarette smoke.

Halley Feiffer’s ferocious, explosive dialogue in I’m Gonna Pray For You So Hard is in a class of its own. While there are more circumspect phrases to begin a review of Feiffer’s world premiere at Atlantic Theater Company, the agility and sharpness of her technique as a writer is so pronounced, it overwhelms. Helmed by Trip Cullman’s orchestral precision, Reed Birney and Betty Gilpin own the stage for a precarious 90 minutes, performing theatrical acrobatics and deftly navigating the father-daughter minefield Feiffer has created.

Birney is David Bergenstein, an embittered, acid tongued playwright, going to seed in his vaulted-ceiling pre-war apartment on the Upper West Side (rich with exquisite detail and nostalgic charm as designed by Mark Wendland). We find him raving, opining frantically on the “sick cadre of pathetic, sniveling, tiny men with micropenises” that is the American press, to his enraptured audience of one: his devoted daughter, Ella (Gilpin), who anxiously awaits the release of reviews for an avant-garde production of The Seagull in which she plays Masha. The pressure is extreme, as her father is a Pulitzer Prize and two-time Tony winner, a fact he makes no mistake about broadcasting, and he has great expectations of his daughter.

As the wine pours freely and the cigarettes are lit with alarming haste, the conversation gravitates quickly away from Ella’s opening night, and toward David’s storied past of struggle and martyrdom and fame. Ella only sparingly finds space to speak, and in the moments when she oversteps, we see a cold, sociopathy emerge from within David, and the relationship devolves slowly into detachment and resentment, even as Ella begs for her father's forgiveness and acceptance. When the review finally appears online, and the aftermath unfolds, their relationship is in ruins as David rails against Ella’s self-doubt and failure to pursue the fame and recognition he demands of her.

What follows is one of the greatest peripeteia coups in recent years. Feiffer wrenches her narrative fiercely sideways, and the audience is thrust into an entirely new and excruciating degree of intimacy to witness a second encounter between Ella and David. The shift is a masterful collaboration between Feiffer, Cullman and Wendland, and the final ten minutes of the play feature performances by Gilpin and Birney that are as enduringly memorable as they are crushing. Birney especially dominates with an unthinkable cross into pseudo musical theater, delivering the surreal climax of the evening.

This is a special play. And while it will likely receive shallow criticism for being too referential and alienating with its theatrical name-dropping and self-regard, jargon is used here with delicacy and clarity and taste. And Birney and Gilpin cannot be missed.