Off Off Broadway, New Play
Runs through 2.14.15
The New Ohio Theatre, 154 Christopher Street 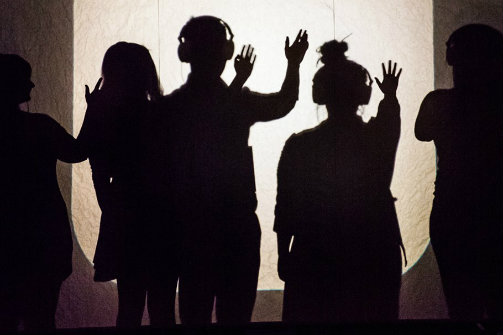 BOTTOM LINE: A perfect New York-y look at the complex and musical nature of online dating that just might make you consider how fate and the internet connect.

The New Ohio is fast becoming my favorite theater for theatre. Case in point: The Human Symphony, an experience created and directed by Dylan Marron of the interdisciplinary theater group The New York Neo-Futurists. The Human Symphony is a series of testimonials Marron conducted over two years with an emphasis on love in this internet age. The interviews begin with his own parents and span a gamut of voices from twenty-something intellectuals to aging realists, all with the capacity to make you laugh at their pratfalls. However, you don’t just sit there and listen to 70 minutes worth of interviews on a blank stage, so who’s the cast?

The program mysteriously points out the play is “performed by YOU!” Even to the most diehard theater fan, this can be terrifying, but Marron’s airtight direction blends the technical necessities of light cues with an artistic eye for chaotic reason. The stage is marked by what seems like hieroglyphs: numbers and signs that have little connection; much like the placement of an orchestra, who knows why things are placed where they are? Marron picks his cast based on a red band they were given at the box office. Like all casts they fit a necessary mold like “mother”, “father”, or “DILF” but as the interviews require more nuance the performers are double casted to inspired results: for example, in the fourth movement of the piece, a woman played a gay man’s story.

The play is separated into “movements” to mirror a classical music piece and in these movements the six “chairs” or random performers theatrically illustrate the interviews with only the help of an instructional script programmed to an ipod connected to their shirt. The script seemed to only tell them which hieroglyph they had to reach, but in this rigid technique came real beauty. The instructions were brilliantly unique and when prompted individually, the unsuspecting performers created beautiful images together, though separately. And to make matters better, the play only works because of the rapturous design trio: Sarah Livant with her offbeat lights, Ben Ahles with his cosmically planned set, and composer/sound designer Kyra Sims' gnarly soundtrack.

The second movement encapsulates all this engaging chaotic reason. It begins with a voice: “how do I visualize the internet?” and from there multiple interviews overlap with their theories. The performers abstract these revelations to hilarious and pause-worthy degrees. With an eye to its title, this play beautifully delves into the intricacies of humanity with pathos and fun. Brace yourself for an enthralling night of watching interesting people perform interesting people’s stories. The Human Symphony is perfect for those who are curious about “avant-garde” but nervous they won’t get it; this show does it with familiar theater techniques and light-hearted storytelling. The fact that you don’t know who’s being interviewed or who’s performing allows you to experience a pure theatrical moment. I would definitely see this show again and you will want to as well.

(The Human Symphony plays at The Ohio Theatre, 154 Christopher Street, through February 14th, 2015. Performances are Mondays, Wednesdays, Thursdays, Fridays, and Saturdays at 8 PM; Sundays at 3 PM. Tickets are $18 online, $20 at the door. For tickets and more information, visit www.nynf.org.)