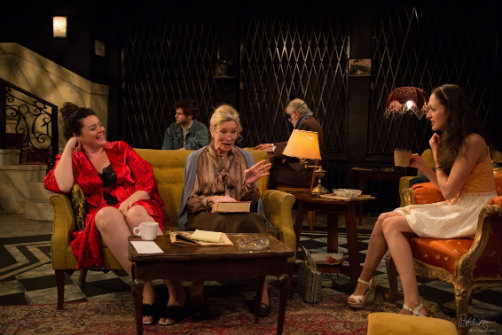 In this era of short attention spans and constant reinvention, it’s nice to see some New York theater go back to its roots. In the midst of two Spider-Man movies in the past three years (and five in the last 15), it can be easy to lose sight of what made some pieces of art so good in their first incarnations that they survived to delight audiences years later. The original off-Broadway run of Lanford Wilson’s The Hot L Baltimore ran for over 1,000 performances; in The T. Schreiber Studio & Theatre’s revival of the classic play, directed by Peter Jensen, we see glimpses of why. Jensen is not afraid to strip away modern sensibilities and faithfully expose the heart of Wilson’s study of a Baltimore boarding house gone to seed, with its distinctive characters and their outlandish actions.

For those unfamiliar with the play, to call it “ambient” would be an understatement. Much like Wilson’s other work (perhaps the most famous of which is the drug-fueled diner deconstruction Balm in Gilead), The Hot L Baltimore shows the audience a place and imagines what kind of people might inhabit it. The place, in this case, is the Hotel Baltimore, a flophouse in such bad condition that, as the title indicates, its sign may be missing a letter. As for the people, there’s Bill (Jerry Topitzer), the harried front desk worker, Paul Granger III (Shane Rodney Lacoss), the mysterious boy who has been sleeping on a chair in the lobby, and no fewer than three, count ‘em, three prostitutes. The play’s inciting incident (if such a thing exists) immediately makes itself plain: the hotel has recently received an eviction notice, informing the owner Mr. Katz (Bill Barry) that he and his tenants must evacuate in one week or they’ll be bulldozed. The news comes as a relief to some of the attendant itinerants—the building features windows that won’t close and its pipes have lately been spewing orange water—but mostly it is met with alarm. “Where will we go?” everyone is left to wonder, with each taking his or her own approach to the prospect of impending homelessness. Over the course of the next two hours, each character’s values, schemes, and flaws are laid bare for all to see.

The Hot L Baltimore is written for a cast of thousands (well, 15), with some having more to do than others. All except desk worker Mrs. Oxenham (Joan D. Saunders) and the somnambulant Granger get a turn in the spotlight, but those two do get to unravel the play’s most tangible non-eviction plot, Granger’s search for his missing grandfather. The play is heavily character-driven; Wilson cares less about happens to these people and more about how they respond. The beauty of the piece lies in watching members of the ensemble chew over their generally reprehensible characters in search of redeemable qualities. In this particular cast, special notice must be given to Jill Bianchini, who finds pathos in the chronically mistreated prostitute Suzy, Anna Holbrook, who infuses the play with heart and charm as the avuncular tenant Millie, and Stephanie Seward, whose crass prostitute April Green is a pitch-perfect comic breath of fresh air. Kudos also to set designer George Allison, whose excellently specific scenescape transports the audience so thoroughly that I left the theater feeling like I needed a shower.

Though I went into the performance knowing something of Wilson’s canon, this was the first time I had seen this particular piece. I feel lucky to have witnessed such a faithful revival, especially one that highlighted the piece’s natural comedy without getting lost in its darkness. Lesser companies could have easily focused on the depressing aspects of these characters’ stories and surroundings, leaving the audience numb. Instead, the cast milks each joke or madcap moment, most notably a brief bout of voluntary nudity underscored by an unwanted rendition of “O sole mio.” It’s more or less what I expected from The T. Schreiber Studio & Theatre, which in 2010 produced a much-heralded revival of the aforementioned Balm in Gilead (also directed by Jensen), about which Theasy’s own Ben Charles raved that he’d never seen anything like it before.

So as the holiday season approaches, if you find yourself feeling choked by Star Wars hype, uninspired by the latest jukebox musical, or longing for the days of the old James Bond, you could do a lot worse than taking up residence at the venerable old Hotel Baltimore. They’ll leave the light on for ya.

(The Hot L Baltimore plays at The Gloria Maddox Theatre, 151 West 26th Street, 7th Floor, through November 21st. Performances are Wednesdays through Saturdays at 8, with special Wednesday matinees on November 11th and 18th at 2. Tickets start at $20 and are available at web.ovationtix.com/trs/pr/950455 or by calling 212.352.3101.)

The Hot L Baltimore is written by Lanford Wilson and directed by Peter Jensen. It is produced by T. Schreiber Studio and Theatre. Set design is by George Allison. Lighting design is by Eric Cope. Costume design is by Mary Cann. Sound design is by Andy Evan Cohen.