Off Off Broadway, Comedy
Extended through 5.28.15
Stonewall Inn, 53 Christopher Street 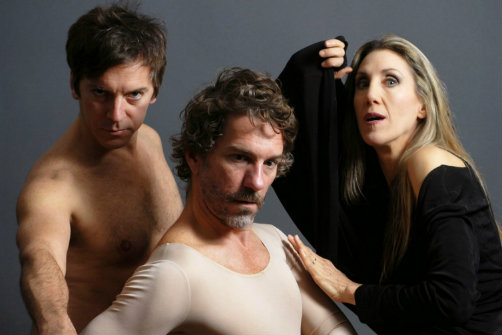 It may have been Steve Martin who said “Comedy is not pretty,” but it’s the performance art trio Unitard that embraces that thought with alarming glee, and often with riotous results. The off off Broadway team, which consists of Mike Albo, Nora Burns, and David Ilku, is back to throw a little of their trademark caustic shade at cultural stereotypes and assumptions.

Their new collection of scenes and monologues, House of Tards, plays Thursday nights through April 23 (and likely longer) at the legendary Stonewall Inn in the West Village, a location that seems a deliberate choice. Because although it’s not the seedy dive it was in the late 1960s, the Stonewall is still something of a throwback to an edgier, pre-gentrified New York. And House of Tards is not so much a valentine to that era as a bitter, darkly funny eulogy.

In one of her more effective solo turns, Burns plays a chirpy Connecticut society lady who’s decided to trade in Greenwich for Greenwich Village, now that the downtown scene in the latter has been steamrolled out of existence by the very likes of her. Showing off her fantasy pad in the controversial Greenwich Lane complex, which is going up in real life on the former site of St. Vincent’s Hospital, she points out its “Bauhaus bohemian” features, ranging from state-of-the-art technology to an occasional nod to the neighborhood’s co-opted and commercialized past—a street urchin motif here, some trendy (albeit imaginary) cameos by artists Marina Abramović and Banksy there. And in case any of this satire is in danger of becoming too cute, Burns fearlessly throws in wisecracks about the historic AIDS ward that was displaced by the closing of St. Vincent’s and a reference to the woman killed by falling debris from the Greenwich Lane construction site, an incident that occurred just two days before the performance I saw. Burns scores in other sketches as well, like the pregnant housewife who’s puzzled to find herself in a gay friend’s Grindr photo and a heroin addict stumbling mutely through the audience while her voiceover calls out perky non-sequiturs over a loud speaker.

Albo brings his own razor-edged wit into this production, such as Uncle Mike trying to casually explain away the horrific injuries visited upon the children he’s been babysitting, and his glib urbanite character who finds himself obligated into a series of shallow responses to a friend’s increasingly tragic news just so he can borrow an iPhone 6 charger. That last segment is a particularly representative moment in a show that is largely about the addictive lengths we’ll go in the 2010s—drugs, social media, tenuous online connections—to avoid truly relating with each other. Albo and Ilku have hilarious moments together in an ensemble piece about sober Facebook addicts “liking” each other’s inane status updates.

Ilku, like his two co-stars, provides strong support in these group scenes. He has a rich range of voices at his disposal. But his monologues are more one-note than the others; they’re the kind of single-joke sketches you see on Saturday Night Live, which start with a funny image and concept but fail to build on them. At the performance I saw, one of his bits inadvertently ended with a chaotic tangle of microphone cords that he managed to improvise into a briefly amusing moment. It was a reminder that some of his best work downtown was in an absurdly chaotic drag duo called the Dueling Bankheads, and it would be intriguing to see what would happen if he let loose and brought more of that thoroughly baffling, Dada-esque quality to a Unitard show.

But, on its own terms, House of Tards, which is directed by Paul Dobie, is an entertaining and sorely needed reality check at a time when a cherished way of life is disappearing beneath a layer of pixels and billionaire condos.

(House of Tards plays at the Stonewall Inn, 53 Christopher Street, through May 28, 2015. Performances are Thursdays at 8PM. Tickets are $20 ($25 at the door) plus a two-drink minimum and are available by visiting unitardcomedy.com.)