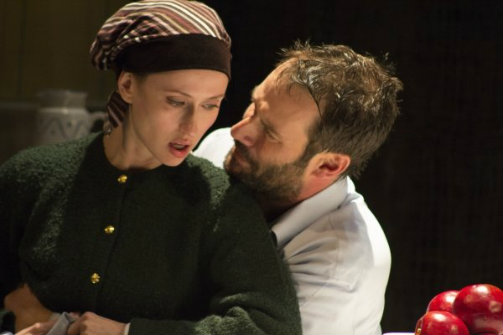 BOTTOM LINE: An excellent production of an Israeli play that ponders if true love can survive irreconcilable religious beliefs.

Being an atheist is fashionable these days. With mainstream intellectuals like the late Christopher Hitchens, Richard Dawkins and Sam Harris shamelessly mocking believers by likening religious doctrine to fairytales, a self-respecting thinker can own up to his faith only at the risk of appearing maudlin. What atheists won’t admit is that a fervent belief in the absence of god requires every bit as much a leap of faith as a belief in the presence of one. Whether you’re a staunch atheist, an orthodox Jew, or devout Catholic, you can’t prove your views or even explain why you believe them. You just do. Faith works a little like love in that regard. You can’t explain why you fall in love with someone. It’s beyond logic and reason; you just do. That’s why it’s so satisfying to watch faith and love juxtaposed in Motti Lerner’s excellent and complicated two-hander, Hard Love.

Lerner is an internationally acclaimed Israeli playwright, and it’s quite clear from the script’s cadence that Hard Love was not originally written in English. As a native Hebrew speaker, I could tell that some of Lerner’s lines, which I’m sure are unforgettable gems in Hebrew, don’t have the same ring in translation. But actors Ian Kahn and Victoria Mack are magnificent at embodying the foreign cadence. The language doesn’t sound awkward or strained in their mouths. It feels as though they are actually speaking Hebrew, but somehow the audience has been granted the power of magically understanding their words in English. Kahn and Mack are exceptionally convincing as ultra-orthodox Jews living in the strictly religious and isolated enclave of Me’a She’arim in Jerusalem.

After he gave in to his atheist leanings, Zvi (Kahn), still known to his religious community as Herschel, uprooted his life and liberated himself from the religious environment he found suffocating. But his freedom came at the cost of losing his devout wife, Hannah (Mack), a woman he is deeply in love with still. Now, after being apart for the last 20 years, Zvi is summoned back to Me’a She’arim by Hannah as she pleads with him to keep his secular son (from a second marriage) away from her devout daughter (also from a subsequent marriage). Old passions are reawakened in their reunion and their religious views are challenged by their insatiable desire for one another. But can true love overcome a difference in religious opinions?

This is a love story, to be sure. But hopeless romantics might find Hannah and Zvi’s reluctance to reconcile their religious views in the name of love frustrating. Anyone unfamiliar with the stringent laws of orthodox Judaism might find this play needlessly weighted with Judaic minutiae conveniently invoked for the sole purpose of driving a wedge between these two lovers. But as an Israeli-American and a Jew, this play feels completely authentic and inevitable.

Mack and Kahn are excellent. They yearn and lust for one another desperately with every fiber of their being. You hear it in their voices and feel it in their bones.

Consisting of two simple walls and three enormous muslin strips, John McDermott’s beautiful set design invokes an old-world feel by not only featuring, but celebrating, the materials used. The walls and muslin evoke a sukkah, a temporary dwelling that Jews build in celebration of a harvest festival.

This play will undoubtedly resonate with Jewish audiences, particularly those who are critical of the ultra-orthodox. Non-Jewish audiences will probably spend a little too much time wondering why these characters are allowing religious laws (in Hannah’s case) and religious intolerance (in Zvi’s case) to stand in the way of genuine love. But orthodox Judaism is a rigorous lifestyle that mandates procedures for the most private and intimate aspects of life. It’s not that easy to expect Zvi to tolerate Hannah’s observances or Hannah to abandon her lifestyle. Hard Love is sure to intrigue and challenge all who pride themselves on religious tolerance. But be forewarned: you are likely to find this play foreign to your American sensibilities. It’s fine and good to journey to Jerusalem for a passionate love story, just as long as you remember that you’re not in Kansas anymore.