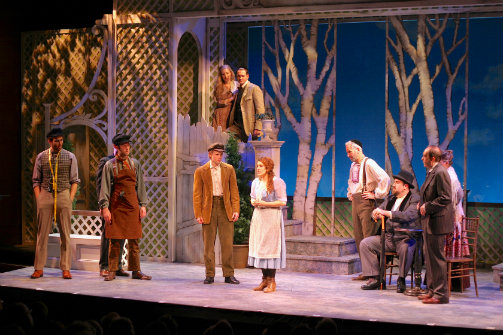 The cast of The Golden Bride - Di Goldene Kale.

Often times we hear it said that nothing new is ever created. That, of course, doesn't matter in the end seeing that it doesn't matter what you say, but how you say it. This is exactly what The Golden Bride allows us to witness. Echoing Franz Léhar's The Merry Widow in melody, orchestration and plot, and building a story with themes such as the pursuit of a better life and the search for love, The Golden Bride or Di Goldene Kale preserves a portrait of Jewish culture and history while building a dialogue with themes pertinent to and present in the reality of the United States nowadays.

The operetta tells the story of a poor orphan girl named Goldele (Rachel Policar) who inherits a fortune from her estranged father and leaves Russia for the United States to live with her uncle Benjamin (Bob Ader) while awaiting for the return of her husband-to-be, Misha (Cameron Johnson), who traveled the world to bring back her long-lost mother Sheyndl (Regina Gibson). Raised by the cunning and quick-witted Toybe (Lisa Fishman) and her affectionate husband Pinchas (Bruce Rebold), Goldele grows up close to the couple's daughter Khanele (Jillian Gottlieb) in a loving environment in a shtetl in Russia. With the sudden plot twist of the inheritance, Benjamin and his son Jerome (Glenn Seven Allen) come to her to take her to the United States where a new life in a new world awaits her.

There is much to praise in this production. Policar's rendition of Goldele is outstanding. Her crystal clear voice, well balanced register, and solid technique pull our attention to her every time she's on stage—which is, luckily, quite often. Johnson offers an interesting contrast between his tender looks and strong vocal performance while portraying the young, loving Misha. He delivers an impressive vocal performance. Gibson and Rebold own their characters and give us a most delightful show, be it praising the dollar or flirting with each other like only newlyweds do. Another couple that occupies the spotlight is Allen and Gottlieb. In their intentionally awkward and over-the-top performances, they're the goofy, theater-loving pair with little care for practicality. Gottlieb endows Khanele with a rich timbre, exploring her chest and head voice with equal success while Allen, at times out of sync with his stage companion, makes due with a more sober but still effective sound while delivering his Yiddish in a heavy but delicious American accent. Ader plays the successful and entrepreneurial uncle Benjamin with discretion and hits the spot in doing it so. Adam B. Shapiro brings joy and diversity to the mix as the sharp matchmaker Kalmen, be it in a suit or, let's just say, something just as fitting. The ensemble is well balanced and helps keep the show fluid and alive with their precise moves and vocal harmonies. Special props must be given to the women whose voices flew seamlessly along with the orchestra while the men delivered in pitch and timbre, but not as gracefully.

The traditional two act structure and the light comedic tone and waltz-like orchestration of the operetta are here infused with the colors of Russian folklore, liturgical chants and Jewish music and then made richer by a contrast with American rhythms, like the sounds of jazz from the roaring '20s, for instance.

The show, however entertaining, doesn't shy away from making quick comments of social and political value. Although the stakes aren't high and the conflicts are quickly dissolved under the guise of jokes or friendly misunderstandings, we are shown and reminded of the plight faced by immigrants and foreigners when arriving in the U.S.—making fools of themselves while speaking a new language, shedding their clothes and therefore part of their identity to fit in and look fresh, etc.

Directors Bryna Wasserman and Motl Didner punctuate the different moods in the show by a clever use of space as well as lighting by Yael Lubetzky and the two universes, namely, Russia in the first act and the U.S. in the second, are brightly painted by a detailed costume design by Izzy Fields. The set by John Dinning is simple, functional and well used, making this production a carefully thought out spectacle. And besides the sound being slightly louder in the second act than in the first, all else falls into place technically and contributes to a night of entertainment and delight.

The Golden Bride serves musical quality, aesthetic potency and a thoroughly entertaining evening for those that appreciate music, history and the broadening of minds.

The Golden Bride is written by Frieda Freiman, with lyrics by Louis Gilrod and music by Joseph Rumshinsky. Directed by Bryna Wasserman and Motl Didner with Zalmen Mlotek as the conductor and musical director. Choreography and musical staging by Merete Muenter. Scenie Design by John Dinning, costume by Izzy Fields, lighting design by Yael Lubetzky, sound by John Emmett O'Brien and props by Addison Heeren.