Tickets are available at www.artful.ly/godisaverb 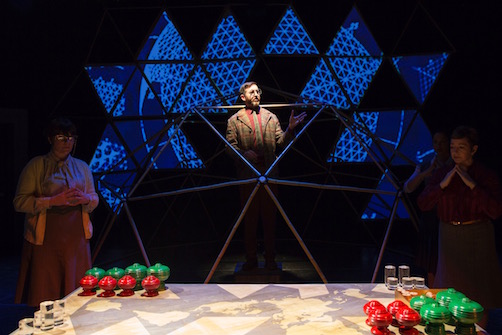 God Is a Verb

Carrie Heitman, Jamie Effros and Elizabeth London in GOD IS A VERB. Photo by Mitch Dean.

BOTTOM LINE:  An entertaining, absurd adventure that explores the mind and mystery of R. Buckminster Fuller.

When Ida (Hannah Hartmann), a plucky farm girl with a concentration in marine biology, reports to New York to begin her graduate fellowship, she meets a group of academics who introduce her to their sacred area of study, the World Game Project. This peculiar band of scholars, Skip (Jamie Effros), Hugo (Jacob Trussell), Barbara (Carrie Heitman) and Edith (Elizabeth London), each with their field of expertise, eagerly await the arrival of their leader, the Professor. The phone rings and after a quick conversation, Hugo dons a pair of black coke bottle glasses and, as if suddenly possessed, becomes the Professor. The team then begins their work of playing the World Game, which consists of hypothesizing potential outcomes and inventions to increase sustainability for the world.

At first Ida is a quiet observer, but as she earnestly inquires too deeply into the Professor’s past, the phone suddenly rings again and another member of the team assumes the persona of the Professor. Once she is fully initiated in the eccentricities of the process, Ida attempts to play the World Game, but is unsuccessful. With less than ten days ticking by until their presentation to the United States Senate Subcommittee on Utopian Conjecture, the team is hard pressed to find a way to teach the world to save itself. During a late night, unsupervised round of the World Game, the team unlocks a sure-fire method for unlimited sustainability on Earth. However, upon learning of their discovery, the Professor quickly dismisses it and pushes the team to continue their work, leading his scholarly disciples to question if his intention is to save the world, or merely to bolster his ego.

God Is a Verb is a multi-layered endeavor filled with humor and a deep understanding of R. Buckminster Fuller, the renowned 20th century inventor and theorist. Playwright Gavin Broady’s ability to combine long poetic passages with scientific syntax is at times both bewildering and highly enjoyable. While the Professor is not outright named as Fuller in the text, much of his theories and inventions are present in the story, including an impressive real-time construction of a geodesic dome onstage. There were moments that I was confounded while following the Professor’s penetratingly dense train of thought; however, the clarity and control of craft that the cast displayed carried us along with the story nonetheless.

The entire cast gives excellent performances, rounded out by Cynthia Babek, Roger Casey, Renee Wilson and Sade Namei in various ancillary roles. The direction and set design by Hook & Eye Artistic Director, Chad Lindsey is equally strong and creates a technically synergetic production. While it becomes clear that the play unfolds within the mind of the Professor, the direction and production elements manage to ground it in a bizarre, but truthful reality.

The lighting design by Christopher Weston is highly effective in condensing the large space of the Actors Fund Arts Center into the small, intimate corners of the Professor’s psyche. Additionally, the projection design by Weston G. Wetzel and sound design by Diarmid Flatley create the visual and sensory magic of playing the World Game.

Kudos to Hook & Eye Theater who, as it states in the program, spends over a year to conceive, create and produce their devised pieces. Their joyful passion and understanding of the subject was so apparent in every aspect of this production that it is a testament to the collaborative process of theatremaking. Further, I appreciate a company of artists who trust in the intelligence of their audience and don’t feel the need to water down complex material. I was profoundly comforted by the reminder that we are not just human beings but, as Fuller believed, a process.

Overall, God Is a Verb is great evening of theatre that reminds us of the omnipresent impact of a somewhat forgotten genius.

(God Is a Verb plays at the Actors Fund Arts Center, 160 Schermerhorn Street, Brooklyn, through November 21, 2015. The show runs 100 minutes, no intermission. Remaining performances are Wednesdays and Thursdays at 7; Fridays and Saturdays at 8; with additional performances 11/8 at 3, 11/15 at 3 and 11/16 at 7. Tickets are $25 and are available at artful.ly/godisaverb. For more information visit hookandeyetheater.com.)