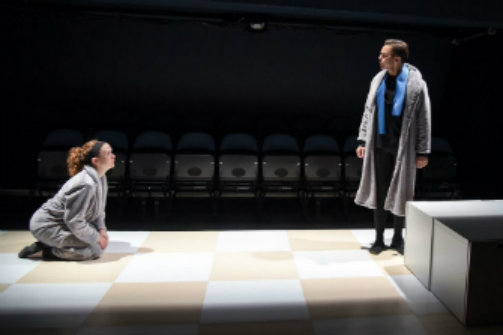 BOTTOM LINE: This new comedy explores the health we improve and the soul we destroy when a utopian society eradicates germs, contagions, and, yes, gluten.

Gluten! is lactose free, soy free, GMO free, and vegan. It may be set in a sterile world (on Jason Sherwood's appropriately lifeless set) but Stephen Kaliski’s play is far from uninteresting. The Adjusted Realists' latest work, which Kaliski also co-directs with Amanda Holston, explores slick city-living after the “Correction,” or the elimination of any disease-causing, sneeze-inducing, or contact-encouraging behavior. It’s as humorously dull as it sounds.

But Josh Tobin, as the charming real estate agent who opens the show, sure makes it sounds pleasant. Tobin pitches the windowless and germ-less apartment to young couple Copious (Jeremiah Maestas) and Hibiscus (Shawna Cormier) who hope to start a family (still no touching!) in their new abode. Conception, in this futuristic world, consists of Copious going into his chamber, masturbating to naughty food show recipes like bacon getting greased and roux mixtures getting stirred, and then leaving the sealed semen out for his wife to use in her own chamber. For how clean and streamlined the whole process is, it still feels wonderfully icky.

Problems arise when Copious’ mother Linda (Maggie Low) pays her son a visit, asking him to join her in the suburbs and go back to living a more holistic pre-Columbian—excuse me, pre-Correctional—life. Linda is joined by her new friend Maple (played with hysterical droll by Roger Manix) who has written a manifesto on how to enjoy simple pleasures like eating foods grown from the earth and living in communities that host sports where contact is permitted.

Thus begins Copious and Hibiscus’ marital rift as they come to disagree about what family and life mean. Maestas and Cormier play this with earnest warmth despite the satire’s over-the-top nature and Kaliski’s kooky script. This is true for much of the play—the plot is not always as compelling as its witty, stylized dialogue, but that’s okay. Laughs abound at the futuristic terms (“pontificate” for think and “c*nt-muffin” for baby), and the five memorable performances buoy the delightful show. (Matt Sherwin’s sound design captivates as the sixth, unseen character—his manic scene change music sounds like a demented Willy Wonka chocolate factory and the apartment’s voice-automated control system, verbalized by Tobin’s buttery tone, contributes an impressive technical layer.)

Kaliski’s satire is successful in reminding audiences of what we lose when we protect ourselves from all ailments, unhealthy snacks, and even contact with others. Like its characters, Kaliski hopes we see the benefit of intimacy while exploring the mess of life. He may be preaching to the choir by presenting this to theater folk, but that doesn’t make Gluten! any less effective.

Later in the show, Maple, our crunchy, Vermont-bred, pre-Correctional living tour guide, platonically offers to touch Hibiscus in an effort to show her human connection. When she is about to be touched for the first time, the audience, like the heroine, holds its breath. Maple then gingerly touches Hibiscus’ face, caresses her cheek, and then taps her nose like a button. Turns out it's not so bad.