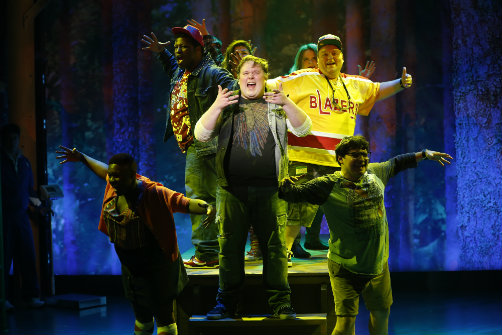 Max Wilcox and Cast in Gigantic. Photo by Carol Rosegg.

BOTTOM LINE: An incredibly talented cast rocks out and goes for broke in this musical comedy about teens at a weight loss camp.

Gigantic—the musical re-titled from its previously named Fat Camp (first seen at NYMF in the 2009, then produced in a limited run in 2012 at the American Theatre of Actors)—is aptly named not just because of its reference to the girth of its main characters, teens attending the “number 3 weight loss camp in Southern Pennsylvania,” but even more so because of the gigantic amount of talent, charisma and energy onstage. The fearless cast belts, hangs upside down on firefighter poles and, in one case, goes shirtless, all the while telling the story of eight overweight (“fat” is a no-no word at Camp Overton) teens spending their summer at the camp.
Leslie Kritzer and Burke Moses play perky counselors and owners Sandy and Mike, a couple who have been engaged fifteen years and fear their camp will be turned into storage units if their campers don’t meet a certain weight loss quota and the camp loses its funding. The campers include a slut (the hysterical and gung-ho Bonnie Milligan), a YouTube vlogger (the appealing Larry Owens), a sci-fi geek (the endearing Jared Loftin), a Goth girl (the extremely flexible MiMi Scardulla), an enchilada-loving Tank of a guy (Cole Ragsdale), and the show’s deus ex machina (Nyla Watson). The energetic Max Wilcox plays camper Robert Grisetti, a drum-playing rocker and self-proclaimed bad boy, whose arrival sparks a rivalry with former-camper-now-camp-poster-boy/junior-counselor Brent, played with delightful goofiness by Andrew Durand, and a romantic interest with good girl Taylor, played by the big-voiced and sincere Ryann Redmond. When the All-State cheerleaders from the camp next door arrive, played by ridiculously sexy Taylor Louderman and backup girls Kalyn West and Jennifer Geller, only the annual color war can help determine which side wins: the scrappy, underdog dieters or the popular, thin interlopers.
If you think you can predict who wins, you’re right. The themes of Gigantic—to be true to and love oneself no matter the flaws—are not revolutionary or groundbreaking, and when the show’s book, written by Randy Blair and Tim Drucker, deals with these clichés, its weakest points reveal themselves. It’s a shame because these weaknesses are even more heavily emphasized by their contrast to the show’s moments of complete and utter hilarity (so many that I’ve had to use my thesaurus to find synonyms for “hilarity” because the word describes every performer and so many of the show’s most entertaining and surprising points).
Two moments of particular note exemplify the perfect unity of performance, design, writing, direction and choreography. First is Leslie Kritzer’s Michael Jackson-fused “Jimmy’s Song (Hater-Aide)” where Gregory Gale’s horrifically wonderful plushy costumes merge with director Scott Schwartz and choreographer Chase Brock’s homage to not only Schwartz’s Bat Boy animal orgy, but Tommy Tune’s lines of cheerleaders in The Best Little Whorehouse in Texas and more than a splash of “Thriller.” Second is Brent and the Cheerleaders, clad in Hefty Bag Puritan garb, and their talent show rendition of that oh-so-ripe for musicalization tale, Arthur Miller’s The Crucible, featuring a cheer to all the “Goodys” of Salem.
When the show goes to these absurd places, everything soars and Gigantic hits its irreverent and, yes, hilarious stride. However, both the book and score (with music by Matthew roi Berger and lyrics by Mr. Blair) tend to fall into a sameness with pop/rock melodies and lyrics that verge on generality and blend into each other. It’s because so much of the show works that these moments ironically stand out for their lack of originality and one longs for the songs and moments that are unique like the arcade-game specificity of “Anshel’s Song” or the Beyonce-tinged “D-R-A-M-A.”
Under Schwartz’s assured direction that flawlessly finds the right balance for the over-the-top comedy, the show looks great on Timothy R. Mackabee’s spot-on forest and bunkroom sets and under Jeff Croiter’s always appropriate but still flashy lighting. Here and there some lyrics get lost behind the excellent band, led expertly by music director Aaron Jodoin, but otherwise John Shivers and David Patridge’s sound design provides the appropriate amount of rock ‘n’ roll reverb.
It’s rare to see a show where every actor onstage not only pulls their weight (no pun intended) but exudes sheer confidence and appeal in every single choice and action made (and it would be incredibly remiss of me were I not to mention the final actor rounding out the 15-person powerhouse of a cast, Katie Ladner whose wonderfully awkward Britta embodies all that is right in the wacky world of the show). Despite the weak moments in the script and score, there is nothing weak about this cast, and having the privilege to watch their magic on the stage is a gigantic pleasure.
(Gigantic plays at Theatre Row's Acorn Theatre, 410 West 42nd Street, through December 20, 2015. The show runs 2 hours, 15 minutes, with an intermission. Performances are Tuesdays at 7, Wednesday-Fridays at 8, Saturdays at 2 and 8 and Sundays at 3. Tickets are $85 and can be purchased online at telecharge.com. For more information visit vineyardtheatre.org).