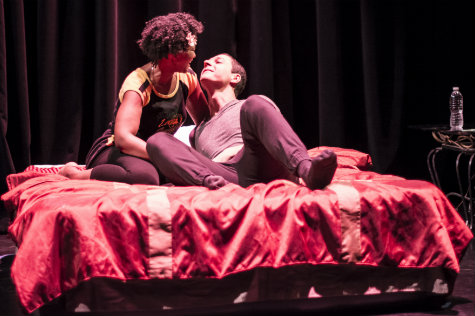 BOTTOM LINE: A well-intended look into the murky waters of love, rape, and its aftermath.

First a one-woman show by playwright/theatre artist Fariso Jordan, Georgia resurfaces as an eight-person play to communicate love’s foibles. Georgia (Jordan), a smart and attractive Jamaican girl living between strict immigrant parents and friends’ undermining lips, takes up with a “green eyed” boy named Ronnie (Matthew Acevedo). In the midst of their growing love Ronnie preens for intimacy, but the virginal Georgia isn’t ready. After several staccato scenes between her and her parents discussing values and her and her best friend Briane (Courtney Vinson) discussing good dick, we find Georgia in the middle of a sleepover with Ronnie. Suddenly, their adolescent giggling dissolves into Ronnie’s solitary grunting. Whimpers, or euphoric groans, are heard from Georgia; muddled questions like “what are you doing?” jut out from the covers. Is it naivete or protest? Then blackout. The next hour examines whether Georgia was raped and the play propels toward a dubious wedding between Ronnie and Georgia. The stage is set for second guessing.

Georgia has the impulse of a hard hitting drama. I was very encouraged by the multicultural cast and creative team’s conscious storytelling with costume and dance to deepen Georgia’s world. Still, I felt the play was mired by setup. We spent a long time prior to the rape with little justification. Ronnie never progressed as a potential rapist in my mind. Although, that could have been director Kevin Benoit’s intention: to let that characterization develop abruptly. But, I felt cheated out of a clear perspective. The log line of the play is “Love can be a breeding ground for monsters” yet I didn’t see my Boogeyman. Instead I saw noticeably flawed characters, but never malicious people. I also saw a sexually searching Georgia make haphazard decisions and then blame the results. I understand that sounds like grade A victim shaming, but there is a strong disconnect between what we see occur, up to and in her bedroom, and what we are told happens afterward. That’s the power of the murk: the inability to process things objectively.

There is a dynamic scene taking place four years after the incident where Georgia finally tells Ronnie he raped her. They’re getting married in a week and so the shock on Ronnie’s face really represents the core of the play. His natural libido has become harmful and devastates not only his future wife, but himself. Acevedo’s Ronnie quietly realizes he has monstrous qualities. When it seems we have moral balance, Georgia goes on to say she cheated on him a week after this event to regain her sexual power. This scene, matched with a series of sermons on forgiveness by Georgia’s stoic preacher father (Matthew Dunigan), gives the audience a chance to adequately compare themselves to these shadows. I encourage everyone to pause before they judge Georgia’s mother (Chantelle Fraser). Fraser, a reality TV star, aptly uses her Jamaican roots to become the strict mother, yet is still stiff in her role. What I really enjoyed, though, was the mother’s commitment to internal racism and how she is willing to overlook her daughter’s rape for the promise of a white son-in-law. Vinson, in contrast as Briane, brilliantly portrays the female libido and its subjective qualities. Watch closely to the hilarious way she inverts sexual harassment with Ronnie’s best friend Greg (David Vaughn Straughn). Briane is unapologetically fast, but quick to call rape. I was slightly confused by her rhetoric of free sexuality and then her blanket anger toward Ronnie for mistaking a cue from his girlfriend.

Again, the scene which sparks the debate is itself like a dream. The audience is unsure if Georgia’s squeals and breathless moans are pleasure or fear. Ronnie, never exhibiting outwardly aggressive bouts of ownership, is mostly compliant with Georgia’s “no.” Yet the fact remains he was not totally compliant. The reversal sexual harassment issue and the idea of unconscious monsters were elements I longed for and are too far in between sharp scene cuts and dragging dialogue. Still, I’m confident that the production's extended summer run will make it stronger for future iterations.