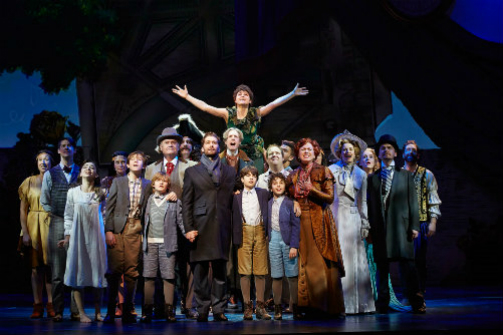 The cast of Finding Neverland. Photo by Carol Rosegg.

BOTTOM LINE: This new starry Broadway musical will transport you to the very core of your imagination.

Stepping into the Lunt-Fontanne Theatre you can already feel the excitement of a promising show. The musical’s Victorian curtain even stands like an inviting grandmother ready to tell you a bedtime story, and yet at the same time its regal hues will likely ignite wonder in even the most callous theatregoer. These images resonate because Finding Neverland represents imagination and weightlessness in ample degree. Between the production’s energetic cast, its gorgeous sets and lights (with heartbreaking effects in tow), the mellifluous score, and the quirky choreography, an audience member can’t lose.

Finding Neverland follows the true story of fatigued Scottish playwright J.M Barrie who stumbles upon refreshment and inspiration when he encounters the offbeat Llewelyn Davies family and their airy sense of living. Barrie becomes smitten with the family’s horde of boys: George, Jack, Michael, Peter, and the boys' strong imaginations. He soon discovers that by attaining adulthood one shuns an empowering force that only children seem to understand. Barrie sets out to write a new play, one that centers on the indistinguishable flame of a child’s imagination through the adventures of a mythical boy named Peter Pan. While rediscovering his theatrical passion, Barrie falls in love with the children’s widowed mother, Sylvia, who joins in reigniting his sense of play. Soon the galvanizing power of Barrie’s new inspiration infects all who surround the work, reminding each person how important it is to dream.

In the midst of this plot a smattering of surreal elements like pirates, pans, and cycling bears represent some beautiful ways to cope with real-life events. Barrie, played wholeheartedly, even Gleefully, by household name Matthew Morrison, often weaves back and forth between the conscious and the imaginary with a light foot; the Llewelyn Davies boys follow close behind. The boys are a wonderful quartet of youthful exuberance and surprising depth. While navigating their anger and sadness over their father’s recent passing, George, Jack, and Michael create a frenzied second world to lighten their spirits, but Peter stands stoically off to the side. Sawyer Nunes’ George, Hayden Signoretti’s Jack, and Alex Dreier as Michael move and sing in perfect harmony. As Peter, Aidan Gemme is cool and measured, but when he finally shares his brothers' outlook the character evolves into an ambassador for the unseen.

Along with the children are their multi-talented adult counterparts. After playing a very different lead role in Mary Poppins, Laura Michelle Kelly beautifully transforms into a fleshly and lively Sylvia who can still sing like a jazzy, regal bird. “All that Matters” is a rapturous song sung in front of an eye-popping London night sky. This number is only matched, and probably eclipsed, by the beauty of “What You Mean To Me,” her chilling duet with Morrison. The song enchantingly reflects the two’s growing history while finally opening their eyes to their hearts. Carolee Carmello stands out as Sylvia’s rigid mother, Mrs. Du Maurier, and Kelsey Grammer delivers on his post as the doubtful producer, Charles Frohman. Grammer goes on as Captain James Hook as well, which pleases the audience to no end. And it is an understatement to say the ensemble is top rate. With the help of some inspired choreography by Mia Michaels, they are able to stand out and shine.

Underscoring each sojourn to fantasy is a complex mix of contemporary and classical songs that contain or rise above the early 19th-century setting. Songwriters Gary Barlow and Eliot Kennedy charge London aristocracy with unexpected rock variations. The second number, “All of London is Here Tonight”, does this with successful moments. The other noticeably rock number is “Circus of Your Mind,” wherein Barrie totally devolves into a mess of a human after he experiences wave after wave of disappointment. The score delivers on the desire for rafter-raising ballads and comedic ensemble numbers, and several songs, including “Believe," “Play,” and "Stronger," represent the writers’ comfortable grip with musical theater form.

One misstep: the ending to Act 1, which culminates with "Stronger," is stacked with too many pieces. The act could finish nicely after “Circus of Your Mind,” which leaves our hero with a strong desire to prove himself, but instead there are two subsequent numbers which say similar things. In the middle of “Live by the Hook” you start to wonder “shouldn’t the curtain be down by now?” And you’d be right. Although the sumptuous score is filled with grand qualities, the show is a whopping 2 hours and 30 minutes. Still, “Stronger” is a perfectly triumphant ending to a great act, decreased only by the fact it includes a Hook that doesn’t get much play later in the second act. The first act ends, though, with a proscenium-clinging group of ship ropes that adequately demonstrate the production’s prowess with design.

I loved Scott Pask’s sets. He creates mythos with dazzling backdrops reminiscent of children’s book illustrations. The painted trees and slanted townhouses or elegant projections (by Jon Driscoll) remark on the characters’ own oscillation between reality and fairyland. Lighting designer Kenneth Posner seemed to have fun creating his exuberant light and sobering shadows. The show’s use of spotlight was actually quite evocative; choosing who to highlight and when was considerably touching. In tandem with the stage design was the superb costuming by Suttirat Anne Larlarb. Larlarb situates the costumes in our understanding of that era, but lifts the heart with the Pan play’s costumes in particular, paying close attention to what we remember from various movies, thereby giving the costumes elegance and fresh life. And for a moment let me bow to Paul Kieve’s illusions and Daniel Wurtzel’s air sculpting, which both wowed my senses. The design’s combined genius comes out in full force during Sylvia’s final scene. The tender and centralized attention to this moment moved me deeply.

The production is rapt with big numbers that lead the audience to new emotional heights; being lovingly directed by Diane Paulus, those heights are ensured. Paulus is a Midas and continues to impart her golden touch to this work. While the story is already a movie and a memoir, I believe she directs James Graham’s fresh book successfully. It was a feat for Graham to include all the pertinent information of this biopic, and though I was confused by the beginning’s exposition, the book feels natural and fun. Listen closely to Graham’s script for unexpected one-liners and hilarious inside jokes. One star Graham earns is the seamless way he transitions from the world of play to the world of reality, and vice versa. I was surprised by how quickly the story could turn.

Finding Neverland is the perfect family musical, even if there are a few suggestive moments. It might be expected that the story emboldens and protects your inner child, while also inspiring actual children, but Finding Neverland still surprises. With its depth and connection to reality, along with its ability to transcend with its talk of inspiration, Neverland has never been so adult. And this show does not feel like a mere retelling of an Academy-award winning film, but instead charts new territory with known elements. My inner child is still dizzy and I am glued to the show’s YouTube page for more signs of Neverland. I hope this be your fate too, mateys.