Off Off Broadway, Operetta
Runs through 11.22.15
The Celebration of Whimsy, 21 Clinton Street 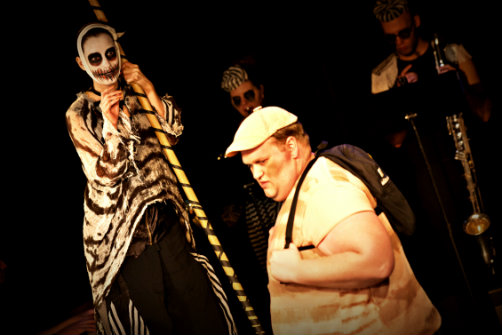 BOTTOM LINE: A dark and twisted operetta about an overweight, bullied youth who snaps when the only person who has ever been nice to him chooses social acceptance at the expense of poor Fatty.

This modern operetta, created by composer Christian De Gré, lyricist Joseph Reese Anderson, and based on the original short story by author Serrana Gay, is a searing look at the damaging effects of bullying and the desperate struggle for popularity. It provides a grotesque depiction of the manner in which an injured soul can be pushed over the edge.

The show begins before the operetta even starts, with two eerie stilt-walkers overseeing the stage. As the audience members trickle in and take their seats, the band, conducted by pianist-music director Aaron Butler, plays upstage in full costume. Though made up of only a piano, a bass clarinet, a viola, and a French horn, the band provides a full and complete underscoring for the deep emotions which the show evokes. As the story starts, we are introduced to Tommy (played by Jason Sofge), as he wakes up at home and laments not only his significant size but also the impending school day. His ode to elastic provides some short-lived levity in an otherwise dark tale. If we are honest with ourselves, the cruelty of children striving for acceptance is something we all remember well, regardless of whether we were the target of such derision ourselves or not. Tommy’s tale is no exception, and as Tommy boards the school bus, we are quickly introduced to Tommy’s alternate name: Fatty.

In fact, not one of the students with whom Tommy interacts knows his real name, with the exception of Emily, played by the adorable and capable Charly Dannis. Tommy’s self-image and self-confidence are ground into the dirt by the thoroughly imposing and authoritative Sally (Mia Thomas), whose lackeys echo her every sentiment. It seems that Tommy may finally break free from his crippling depression when Emily starts to genuinely befriend him, but alas, his skill as an artist actually spurs on Sally’s jealousy, causing her to sabotage the one friendship Tommy could have had. Sally plays upon Emily and Bobby’s insecurities, and Tommy is humiliated beyond what his fragile psyche can bear. From here, the story grows more grotesque (NOTE: this show is NOT recommended for young children!), as well as more metaphorical. There are child-shaped cookies, ghastly ghostly figures, suicidal implications, bright lights which would most likely be found at the end of a tunnel, and the ultimate lesson that one shouldn’t eat a bully, or anyone for that matter. As long as one doesn’t try to take the last 20% of the show too literally, the humanity of the characters does shine through, and the emotions raised throughout are powerful enough to bring one to tears.

The costumes (designed by Ashley Soliman) and the makeup (designed by Kate Marley) are stunning, providing an artistic element that transports the viewer into a visually captivating world which is simultaneously other-worldly and frighteningly familiar. Feast and Famine are particularly unnerving as the gatekeepers and narrators. Mia Thomas, as Sally, is such a convincingly despicable human being that I truly found myself cheering her gruesome fate. Jason Sofge shines as Tommy, not only because of his powerful voice and impressive range, but largely (no pun intended) because his pain, his trepidation, his hope, his sadness, his rage, and his regret are so incredibly palpable. Charly Dannis provides an adept counterpart as Emily, and it is the humanity of their relationship, the tragic fumbling, that draws tears. The entire cast is extremely strong, and individual characters stand out with wonderful quirks of their own.

The orchestrations are complex and beautiful, and the lyrics, though sometimes repetitive, drive the message home aptly. Certain tongue-twisting phrases are especially powerful. The producing company, Mind The Art Entertainment, has a wonderful legacy of producing powerful pieces that, while often non-traditional, are certainly memorable. Overall, Fatty is an operetta with tremendous heart, haunting melodies, engaging characters, gut-wrenching emotions, and valuable lessons, which should not be missed.

(Fatty Fatty No Friends plays at the Celebration of Whimsy, 21 Clinton Street, through November 22, 2015. The show runs 70 minutes with no intermission. Performances are Fridays at 7:30 and Sundays at 3. Tickets are $30 and can be purchased online at www.MindTheArtEntertainment.com.)