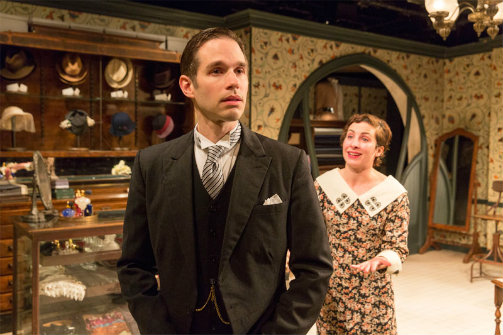 Joe Delafield and Annie Purcell in Fashions for Men. Photo by Richard Termine.

BOTTOM LINE: Hilarious, heartbreaking, and gorgeously designed, Fashions for Men is a deftly-constructed examination of one man’s relentless kindness in a corrupt world.

The old adage “kill ‘em with kindness” has never applied to any character as strongly as it does to Peter Juhász, the lead of the Mint Theater Company’s current revival of Ferenc Molnár’s Fashions for Men. Endearingly played by Joe Delafield, Peter Juhász is a staunch believer in humanity’s goodness, even when it clearly takes advantage of his own kindness.

Peter runs a haberdashery (a shop for men’s and women’s fashions) with his wife Adele (Annie Purcell) and elderly shop assistant Philip (the droll Jeremy Lawrence). Peter runs a friendly business, treating all of his employees with respect and frequently extending credit to his long list of customers. His shop, however, is going under, and his creditors want 51,000 kronen, money Peter has set aside specifically for his wife. Not only that, but Adele is planning to run away to Berlin with her husband’s best salesman Oscar (the sly and charismatic John Tufts). To add insult to injury, Adele has given the 51,000 kronen that would save her husband’s shop to Oscar so he could start his own business. When Adele informs Peter of this news, he consoles himself with the fact that she was at least honest with him, and that "it must rain some days." Left divorced and penniless, Peter takes a managerial job with his benefactor, whom the characters refer to as the Count (Kurt Rhoads). He is followed by Paula (Rachel Napolean), another shop assistant who tells him she is following him out of loyalty, but secretly wants to get with the Count and leave her modest life behind.

According to the program notes, the play premiered in 1917 at Budapest’s National Theater, and opened on Broadway in 1922. Critics have described Peter’s relentless kindness as “unworldly,” “benevolent,” “incompetent,” and “pathetic.” It is completely understandable if today’s audiences find him rather dim. As someone who finds relentlessly angelic characters a bit tiresome, I certainly didn’t agree with all of his choices. However, under Davis McCallum's direction, Delafield plays his kindness as both a strength and a flaw. While Peter’s excessive generosity lands him in bankruptcy and occasionally renders him incompetent, it’s also able to move other characters into beneficial action. Confronted with infidelity, ulterior motives, betrayal, and deceit throughout the play, Delafield allows the audience to see Peter’s struggle with seeing the world in such bright tones. This constitution not only makes him a multi-dimensional character, but also makes him seem even stronger than he might appear.

Delafield is well matched by the rest of the capable ensemble. He works especially well with Rachel Napolean, who as Paula starts off a bit quiet, but finds her center by the end of the first act. She gives a stunning performance that delicately balances the line between wide-eyed ingénue and scheming coquette. I actually felt that this was Paula’s play more than Peter’s. She has the stronger character arc, and changes more by the end of the story.

Ferenc Molnár’s most known play is Liliom, the inspiration for Rodgers and Hammerstein’s Carousel. In Fashions For Men his writing is deftly constructed, in spite of a few excusable contrivances. The play is performed in three acts, the strongest of which is the second, which effortlessly transitions from hilarious, door-slamming farce to heartbreaking, honest human drama. It is well served by Davis McCallum’s well timed and highly efficient direction — the two hours and forty minutes fly by, and during the intermissions I couldn’t wait to get back into the story. Daniel Zimmerman’s gorgeous sets (I wanted to stop in that haberdashery!) and Martha Hally’s beautiful costumes contribute beautifully to the production. The play might require some patience for those who aren’t accustomed to the slower pace and more deliberate structure of older plays. However, the play’s question of whether kindness and enterprise can go hand in hand is scintillating and fascinating.

(Fashions for Men plays at the Mint Theater Company, 311 West 43rd Street, through April 12, 2015. Performances are Tuesdays through Thursdays at 7PM; Fridays at 8PM; Saturdays at 2PM and 8PM; and Sundays at 2PM. Tickets are $27.50 - $55; for tickets and more information visit minttheater.org.)