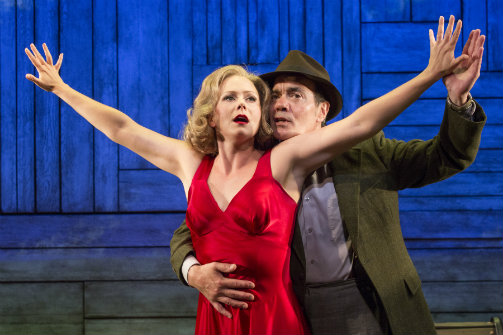 BOTTOM LINE: This evening of adapted Tennessee Williams shorts will leave you panting.

Tennessee Williams isn’t easily replicated, but he is easily referenced. His tortured debutantes and feeble men can waltz sadly in 1959 or 2015 to the tune of their stagnation and heat. Yes, in every Williams play is a noticeable fire already burning, getting quenched, or newly ignited. It’s surprising and deeply satisfying that some of our brightest playwrights, including women and men of color, reinterpret Williams’ scorching texts. Each playwright, taking one of Williams' short stories, creates a piece both individual and ensemblic. Moved by the stellar actors from The Acting Company, the plays transport us back and forth between “Negro” realities and Instagram-fueled Alabama State after-parties.

The minimal yet impactful stage design by Jeff Cowie and exquisite lighting by Russell H. Champa seamlessly transition plays and make them unique. On an unadorned wooden stage windows are opened and people climb up a stylized tree, creating a Tennessee-infused dream. Thanks to David C. Wollard’s authentic costuming and Richard Corely’s dramaturgy, each play rests in sound reality. Through John Gromada’s sound design and original music, the plays are fresh. The result is a staggering evening, tightly conducted by director Michael Wilson with an impressive flow.

The Resemblance Between a Violin Case and a Coffin, by Beth Henley, surrounds a sweet and crumbling piano student named Roe (Juliet Brett) whose performance anxiety seems to increase with her passage into womanhood. While the older women chirp around her, the play sets up a nice tension in the complicated relationship with her, her brother Tom (Mickey Theis), and the strapping violinist Richard Miles (Brian Cross). The play incorporates dance by Peter Pucci and deconstructs props like a piano while inventively portraying a bicycle. The melancholy tone sits in you like whiskey and starts off the night.

Tent Worms, by Elizabeth Egloff, is the first contemporary clad piece. A married couple, Clara (Liv Rooth) and Billy (Derek Smith), attempt to rest in Cape Cod in spite of Billy’s growing mania. His inability to write his next book causes him to lash out. Yet, it’s to the area’s tent worms that he points his anger. His discomfort grows in a particularly rich monologue about futility. Meanwhile Rooth’s Clara tries to keep her head, failing miserably as she confesses a harsh truth to Billy’s doctor. The play climaxes in flames.

You Lied to Me about Centralia, by John Guare, takes its roots from the short story that inspired The Glass Menagerie. A feat of visual monologues, you easily picture a sun room and the white smoking jacket or the sounds of laughter and images of salmon loaf. An engaged couple, possibly ill-matched, sit at a train station having experienced similar encounters, though they don’t know it. Betty (Megan Bartle) explains the devastating blow she faced asking a rich uncle for a loan, citing his peculiar new living arrangement as the reason for his cruelty. Her fiance, Jim (Theis), at first an uninterested listener, begins to tell her of a dinner he had at the home of the office “Nancy boy,” much to the chagrin of Betty. His effervescent retelling disquiets an already frazzled fiance and wheels turn in them both. Bartle and Theis are generous partners in the play and Guare’s script is simply elegant with that signature humor.

After intermission, Desire Quenched by Touch, by Marcus Gardley appears. Following the interrogation of a black masseur, Le Grand (Yaegel T. Welch), the play drives an eerie reality and gets at Williams’ bizarre side. The scenes with Le Grand and Anthony Burns (John Skelley) are vibrant and uncomfortable. Skelley and Welch play with each other like they were instruments and Smith’s turn as Det. Bacon is satisfyingly droll. Gardley’s absorbing play eats the stage and devours us in the process.

Oriflamme, by David Grimm, comes up next with a Blanche-like Rooth approaching a park bench dressed in scarlet red. As Anna, Rooth stunningly portrays a sickly woman in need of a kind stranger; what she gets is unexpected. Rooth’s Anna gives us a wonderfully Williams monologue about an ex-beau; her lovelorn days wear on her skin like the dress. Smith’s Rodney is a great character, deeply darkened by his actions. Having been in Tent Worms together, Smith and Rooth seem to turn hotter and brighter in this play. Their chemistry is sizzling; it doesn’t hurt that Rooth’s dress is the great flag on a hill.

Ending the evening is a piece set in the present called The Field of Blue Children by Rebecca Gilman. Skelley plays a forlorn poet named Dylan trapped in an unfeeling relationship with a political intellectual (Kristen Adele), but finds attraction and affection with sorority girl/possible ditz Layley (Bartle). A wonderful turn by Adele, Gilman writes some wonderfully pretentious one-liners and it’s Adele who pierces through race, class, and gender to deliver them. Still, there’s the great divide that we get ample glimpses of. The narrative nicely transitions to Layley’s dissatisfaction with her superficial friends as we see her skip a football game for a poetic field. There, she and Dylan have a hilarious date which brings them both to ecstasy. Yet, the play questions if one can survive solely on poetry.

The intersection of past, present, class/gender/race and sex displayed in each of these plays displays Williams’ genius and resonance. Brought to life by a superb acting company, this production is definitely desirous. If you know Williams’ work you’ll have fun seeing his characters reimagined and the genesis of his tropes—where’s the Amanda, the Brick, the Stella? If you don’t know his work too well the panoply of plays stand on their own having been written by some of our nation’s best playwrights. Get hot with Williams at this evening of stellar theatre.