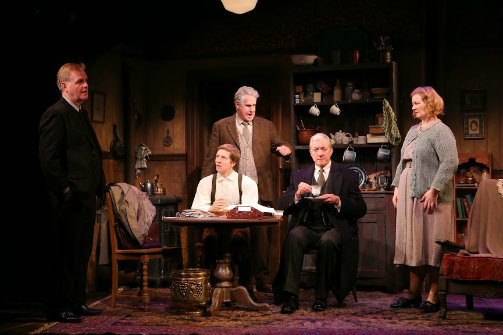 Bottom Line: A surprisingly unsentimental and very funny comedy about what we owe the ones who raise us, Da is both emotionally and intellectually fulfilling.

The anguishes, joys, frustrations, and complexities of the relationship between parents and children are on full display in Da, Hugh Leonard’s Tony Award winning 1978 comedy now receiving a revival by the Irish Rep at the DR2 Theatre.

The plot of Da sounds a bit like an Irish Lifetime movie: Charlie (Ciarán O’Reilly) returns home to settle the affairs of his recently deceased dad (or Da, as he’s referred to in the play, played by Paul O’Brien). However, Da’s spirit is alive and well, and won’t leave Charlie alone. In a series of non-linear flashbacks, we watch Charlie confront his past and his complicated relationship with his family. A younger version of Charlie is well played by Adam Petherbridge.

We learn early in the play that Da and Da’s wife (referred to as Mother, played by Fiana Toibon) are Charlie’s adopted parents. His biological mother abandoned him years before. The two have created a stern but loving home for Charlie, and have successfully put him through school. After graduating, Charlie accepts a job as a file-clerk with civil servant Mr. Drumm (Sean Gormley), who warns Charlie that Da, with his low social standing as a gardener, will only prevent him from succeeding. Over the course of the play, we see Charlie’s relationship with Da gradually harden until he only feels resentment towards him.

Part ghost story, part memory play (reminiscent of Tennessee Williams’ The Glass Menagerie) and part family drama, what’s most surprising about Da is its dry-eyed lack of sentimentality. In spite of the somber subject matter, the tone is generally light, going for clever dark humor over manipulative sentimentality. That’s not to say that Da doesn’t have some incredibly touching moments. Most of these moments are courtesy of Paul O’Brien, who is endlessly endearing as Da, even in his character’s less admirable moments. His love for Charlie is always palpable and clear.

The supporting cast is fine as well. Toibon as Mother spends most of the first act coming across as a typical strict Irish matriarch, but has one powerful scene in the second act that shows vast reserves of strength and resentment. Kristin Griffith has a brief, yet delicious turn as the posh Mrs. Prynne. Sean Gormley highlights Mr. Drumm’s dignity and regret. Ciarán O’Reilly makes a fine, if slightly one-note Charlie.

Charlie feels both gratitude and resentment towards Da, and his emotional journey through the play is trying to reconcile these feelings. Initially, he comes across as rather unsympathetic for holding such animosity towards a man who has dedicated a good part of his life to raising him. However, Da isn’t quite a saint either. He is loud-mouthed, intrusive, and occasionally politically incorrect (in one comically uncomfortable moment, he expresses support of Hitler). Leonard’s script -- as well as Moore’s production -- refuses to take sides between the two men. Rather, Charlie and Da are presented as flawed men who are doing the best they can. This makes both characters feel human, and their relationship genuine.

Da echoes the frustrations that many children have with their parents, yet reminds them that what they owe the ones who raised them might be too prodigious to repay in full. It also reminds us that our parents will remain with us always, whether we like it or not. Although these messages sound a bit tough to swallow, they are made sweeter by the many comical moments in the play. They also provide for a lot of post-theatre conversation, and will perhaps make some audience members contemplate their own relationships with their parents. Maybe they’ll even make that long overdue phone call home.