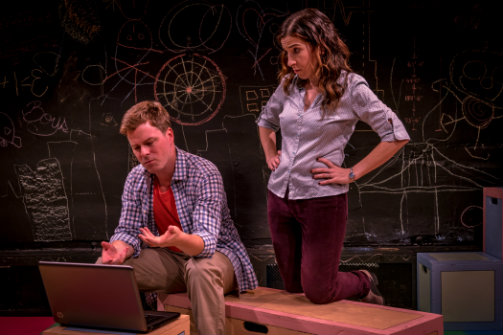 BOTTOM LINE: A laugh-out-loud comedy about the trials and tribulations of breaking into the most elite pre-schools in New York City.

Ben (Eric Bryant) and Amy (Sarah Sirota) are an Upper West Side couple who only want the best for their three-year-old, Charlie. However, in a city that suffers more from urban display than urban decay, having the best means enrolling the tyke in the most prestigious Pre-K in town. Amy takes the task seriously and scours every guide book and mommy blog for the do’s and don’ts of pre-school applications. Ben, on the other hand, is less enthusiastic, and even disturbed by the whole process. They both went to public school as kids and he can’t seem to comprehend what the big fuss is about attending a private school. Through a series of vignette-like scenes, the couple attempts to make all the right moves and maneuver their way through competitive entrance essays, playdates, and open houses. But their efforts are thwarted by circumstance each time, leaving the stressed duo increasingly desperate for a guaranteed “in” to any of the exclusive institutions. When Amy doubts Ben’s commitment to their son’s future, the pair begin to question their responsibilities as parents and ultimately, their marriage.

Cut Throat is a world premiere by playwright JB Reich and the text is infused with comedy at every turn. The dialogue is spot-on and gives a strong indication that this story is inspired by actual first-hand knowledge of the modern parenting complex. While the banter can be biting at times, the majority of the cast smartly chooses to accentuate the humor and downplay the bite.

The numerous supporting characters in Ben and Amy’s life are deftly played by an ensemble of masterful seasoned actors. Among the myriad of characters they embody, the following are a few of the highlights: Melissa Teitel is delightful as Amy’s mommy nemesis Tammy, with the perfect balance of blatant entitlement and décolletage. Adam LeBow makes a hilarious appearance as Max, an overacheiving toddler fluent in Mandarin. Allen Lewis Rickman is endearing as Murray, Ben’s aging father, and sprinkles on just the right dose of passive aggressive parental guilt. Finally, the real charm of the evening comes from Susan Cella, whose incredible range has us roaring at the loopy socialite Binky, only to turn around and tug at our heartstrings as Amy’s mother, Arlene.

The direction by Mark Waldrop is bold, clear, and always with an eye for comedy. Further, in a play about children with no child actors, Waldrop and his team have cleverly created the presence of tots through props, puppets, and costumes. The playroom building blocks-style set design by Brian Dudkiewicz and colorful costumes by Orli Nativ add whimsy and fun to the very quick changes between characters and scenes.

Overall, Cut Throat is a very enjoyable evening of theatre with strong performances and a best bet for anyone who is, or has been, part of the parenting game. However, as a coupled New Yorker myself, with prospects of children down the line, Cut Throat provides a comically ominous future to look forward to.