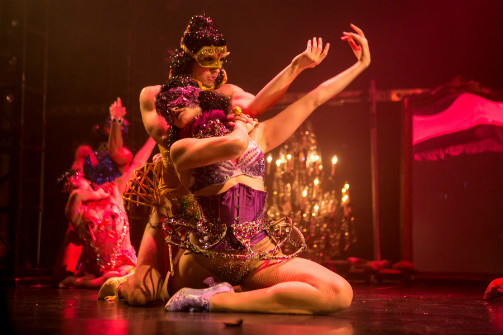 BOTTOM LINE: Company XIV's adaptation of Cinderella is a thrilling combination of dance, theater, and burlesque.

Don’t be deceived by the title, this Cinderella is no run-of-the-mill fairytale. From the company that brought us Nutcracker Rouge, Company XIV’s Cinderella is a fusion of dance and theater, a totally unique “baroque burlesque ballet.” Conceived, directed and choreographed by Austin McCormick, this version of Cinderella has very little dialogue and is told through dance, with help from ingenious silent-film-style cue cards, and punctuated by pop music.

First we’re introduced to our principal characters. Davon Rainey plays a captivating and charismatic Stepmother. He gets his moment to show off with an exquisite dance solo to “A Perfect Lie” by the Engine Room. McCormick has clearly tailored the role to Rainey’s strengths as a performer, and the audience eats it up.

Then we meet the stepsisters, played by Marcy Richardson and Brett Umlauf, in a sort of delightfully twisted vaudeville version of “Sisters” by Irving Berlin. We then meet Allison Ulrich, who is, confusingly, a traditional looking Cinderella. With the un-traditional casting and styling of her stepmother and sisters, it’s almost strange to see a typically pretty Cinderella dressed like a ballerina in the setting of this production. No matter, as she proves to be an accomplished dancer and captivating performer. Rather than having Cinderella sweep the floor or clean, her family cleverly uses her body as a table, to represent the way they walk all over her.

After her family goes off to the prince’s ball, we meet the fairy godmother, played by Katrina Cunningham. Cunningham also sings a lot of the music in the show, lending her sultry vocals to Lana del Ray and others. The “Cinderella Fairy Duet” is an enchanting bit of dance, representing the way the two meet in a sort of homoerotic ballet, and showcasing the excellent skills of both Ulrich and Cunningham.

At the top of the second act, we meet the Prince (Steven Trumon Gray) who is sitting in a bathtub, before performing incredible acrobatic feats on the lyra (hoop) hanging from the ceiling. (I promise you it’s way cooler than Pippin.)

And in one of the final numbers where the Prince is searching for Cinderella and all the ladies of the kingdom are trying on her shoe, the stepsisters have a dance-off, with an epic pole dance by Marcy Richardson. The final lyra duet between the Prince and Cinderella is also truly breathtaking; I’ve never seen anything like it in the theater.

The set and costume designs are by Zane Pihlstrom, with lighting design by Jeanette Yew and Devin Jewett. The lighting is perfectly atmospheric but not too dark to see details, and the set and costumes are an awesome combination of old fashioned baroque and burlesque.

At close to two and a half hours, the show does sometimes drag. Two intermissions are unnecessary, and some of the dance numbers feel overly long. But the dancers are uniformly gorgeous and wonderfully accomplished, and the choreography is crisp and innovative. McCormick's vision is clear and cohesive throughout the whole show. Company XIV’s Cinderella is perfect for a night out with a date or with friends, and I’m confident that everyone will find something to enjoy.

(Cinderella plays at the Minetta Lane Theater, 18 Minetta Lane, through November 15, 2015. Performances are Tuesdays through Saturdays at 8, and Sundays at 5. Tickets range from $40-$65 and are available at ticketmaster.com. For more information visit CompanyXIV.com.)