The Belle of Belfast 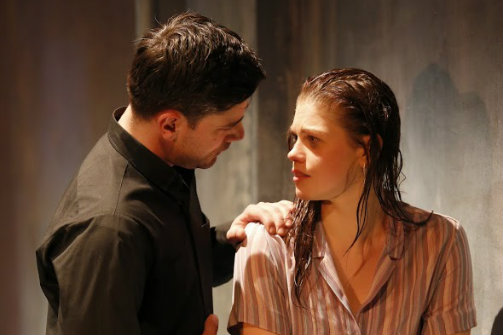 Hamish Allan-Headley and Kate Lydic in The Belle of Belfast. Photo by Carol Rosegg.

BOTTOM LINE: A potty-mouthed young woman with many open wounds falls in love with and seduces a neighborhood priest.

It’s 1985, and the city of Belfast, Ireland, is a tough land to survive in. Citizens bypass rubble and smoke as bombings from an ongoing battle called the Troubles, a civil conflict between Catholics and Protestants (or Nationalists and Unionists) that is expertly portrayed by Jeff Larson with flashing projections, rages on.

Taking place principally in a priest’s confessional with an imagined screen, The Belle of Belfast begins at rest, but never lacks momentum. It opens with a cheeky and entertaining conversation between penitent Emma Malloy (Patricia Conolly) and her confessor Father Reilly. Peppered with foul language and comedy, these opening sequences lay the framework for all that is to come.

And boy, does it come! “It” being in the form of a certain red-headed and red-blooded teenager. When Anne, Emma’s niece, enters the confessional, the hilarity that started with her aunt continues, only with Anne it's far more outrageous. With a penchant for expressing herself with bold and lewd terms, Anne pushes the envelope not only in her delivery, but what she reveals. Unlike her relatively clean aunt, Anne has been quite dirty, confessing strange bedfellows and such. But like Father Reilly, the audience doesn’t quite know if she’s joking or not. That is part of the fun and intrigue of the Belle of Belfast.

Fascinating but having far less fun are Ciara (Arielle Hoffman), Anne’s supposedly overweight best friend who once considered becoming a nun, and Dermott (Billy Meleady), an older, cantankerous priest who complains about his vows.

With the five characters lobbying the word fecking (the pc form of bleep!) back and forth so many times that you lose count, it’s hard to imagine that they're inside a Catholic Church, even though scenic designer John McDermott does a fine job of giving us the visuals with beautiful icons such as the Sacred Heart of Jesus and a prominent crucifix hanging inside of the rectory.

Edelman’s script also never lets us forget that religion, albeit more for political reasons than actual faith, is a prominent factor in Belfast during this time period. There are tons of well-written quips about Protestants, but with all the bumbling and questionable behavior from the priests, Catholics don’t look so hot either.

But while we’re digesting the war and thinking about taking sides, Anne sets something into motion that really tips the scales in the Protestants’ favor. Because according to the show, Protestants may be a lot of things, but at least The Belle of Belfast doesn’t show them behaving out of character and breaking vows. Poor Father Reilly. Caught up in Anne’s spider web, one can’t help but feel sorry for this earnest and devout priest. And after things go down, one can’t help but also feel sorry for Anne in the aftermath.

The genius of The Belle of Belfast is in the way things that are compelling are juxtaposed with things that are flip. One moment you can be laughing because of a wisecrack, but the next moment, your heart can be tugged by a tender look. The dynamics between Lydic and Allan-Headley are chief among those that create this yin and yang, but under Claudia Weill’s tight direction on a modest, well-used stage, the whole cast is impressive.

Another thing that The Belle of Belfast does well is to show the humanity behind the sin. Though Anne and Father Reilly do fall from grace with lasting consequences, the matter is illustrated more with respect than with scandal. Here, the wrongdoers are not demonized. Rather, they are depicted as two people who lose their head and make a mistake. McDermott’s simple, earthy set also helps to ground the audience and keep them centered on what’s important.

The Belle of Belfast has a storyline that is easy to understand: in the midst of mayhem and vulnerability, two people who wouldn’t ordinarily come together, do. There’s very little flash and not a lot of pomp, but the result, a must-see for those who can withstand off-color language and understand Irish dialects, is grand.