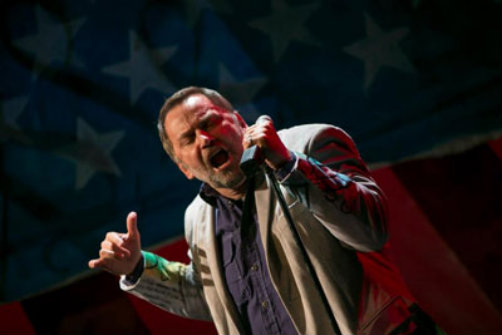 BOTTOM LINE: Money makes the world go ‘round, but it doesn’t need to be that way.

We have so many words for money and Brian Dykstra goes through all of them. He’s building a cannonball of words for battle against the evil powers that be. This is what he does; he uses words -- so many words -- to pull us in and shake us up. We little guys have words too, and we can make some noise and maybe even change the world! Maybe.

Brian Dykstra $elling Out has elements of preaching to the choir, but being part of the choir feels so good. In an eloquent, passionate, and pretty darn funny mixture of spoken word poetry (he is a HBO Def Poet), conversational argument, and shifting from one voice to another, Dykstra builds his thesis and fully commits to the immediate problem at hand: corruption by irresponsible corporations and people with lots and lots and lots of money.

“Money equals speech, so lack of money equals lack of speech.” Dykstra navigates through a world of unaccountable banks that are “too big to fail,” the uber-rich who pull the strings of politicians, a society blinded by religion that has become fat, uncreative, and manipulated by non-news. There’s a particularly tasty bit on the peoplehood of corporations. Many Americans remain content when they should be yelling “FIRE!” The nonsense of it all rings bright and true.

A misplaced belief in God and the dynamics of religion get in the way of our progress. Our real power is through the evolution of our ancestors: the ability to create and the capability to continually adapt and change. The world is ours, not a divine being’s. This isn’t merely a pit stop on the way to heaven -- or hell -- rather it is the end all, be all.

This isn’t a new revelation, but the arguments have never been framed quite this way before. Dykstra’s performance is electric, the comedy well written, and the call-to-action -- or should I say howl-to-action -- propels us to want to do something about the injustice of it all.

Originally commissioned and produced by Kitchen Theatre Company, $elling Out is set with a backdrop of a tattered black and white American flag, used cleverly as a projection screen (American flag by Maruti Evans and Projection Design by Lesley Greene) and filling the stage are scattered files and paperwork of research (based on the original Kitchen Theatre Company by David L. Arsenault). Director Margarett Perry guides us through the rocky terrain of persuasive ranting and the slow, introspective sadness of people who are not heard. Using the small stage well, Perry allows us to experience the howl-to-action, finding that spark that can make us move. The palpable rage and lack of patience is contagious. I looked around: everyone was shaking their heads, laughing through their disgust.

What really strikes hard is Dykstra telling the audience to “be that guy.” Be that artist, that person who speaks -- who yells -- the truth, despite the lack of support. But, after we leave the protection of the theatre, with the shaking, nodding, nurturing heads of liberals, what will change? How many will yell “FIRE!” who didn’t already before? Or, who, at least, will cancel their Bank of America bank account? I’m really not sure.

(Brian Dykstra $elling Out plays at The Playroom Theater, 151 West 46th Street, Floor 8, through March 3, 2015. Performances are Mondays, Tuesdays, Wednesdays at 7PM; Saturdays at 2PM. Tickets are $30 and are available at www.sellingoutoffbroadway.com.)