By Gina Gionfriddo; Directed by Elena Kritter
Produced by The Community NYC 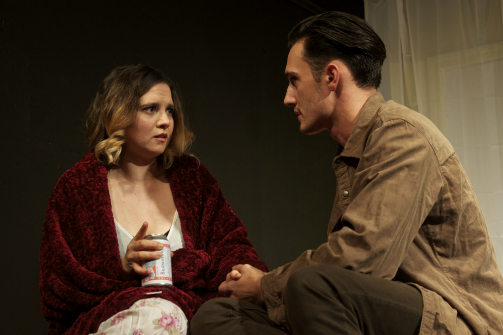 In many dysfunctional family stories, family members simply don’t get along because they have personality types that don’t mesh, or because a family secret tears them apart. But the Slater family in The Community NYC’s revival of Gina Gionfriddo's Becky Shaw proves that family drama is the greater sum of its dysfunctional parts.

In Becky Shaw—nominated for the Pulitzer Prize in 2009—the misguided members of this family share two things: a penchant for Cards-Against-Humanity-esque dark humor (which they showcase by jabbing at race, pornography, women, depression, and more less-than-PC topics throughout the play), and at least a partial share in the family’s demise.

The culprits in this falling-out include: Susan Slater (S. Quincy Beard), a Southern widow and the opinionated family matriarch who cannot live on her own due to MS; Susanna Slater (Jac Grady), a 35-year-old Ph.D candidate in psychology who (ironically) can’t recognize her own psychological barriers or let up on her optimistic (and at times unrealistic/not thought-out) expectations; Max Garrett (Carson Alexander), an abrasive, emotionally-stunted, machismo man around Susanna’s age, who was raised by the Slaters like a son since he was about eight and now works as a successful financial consultant (he takes over as the Slaters’ financial advisor after Mr. Slater passes away, all while navigating the sexual tension between him and Susanna); and Andrew Porter (Alec Wirth), Susanna’s newlywed husband and a sensitive, compassionate man who wants to write, live simply, and be a hero. He is Susanna and Max’s moral opposite, as he recites feminist doctrine and cries over pornography. Lastly, of course, is Becky Shaw (Carly Forde) herself, Andrew’s “delicate,” hopelessly awkward, and clingy co-worker, whom Andrew and Susanna set up on a blind date with Max that goes terribly wrong.

All this Slater family history is so complicated and so sprawling that it takes the entire first act just to get through the exposition and send Becky and Max off on their evening together. Still, it’s absolutely worth the wait for the second act, after the date: When Becky feels traumatized after a robbery during the date, she clings to Andrew for comfort. While Andrew seeks to stand by Becky and starts spending more time with her than with Susanna, everyone’s bad sides come out, deeper tensions between couples are revealed, and all these characters come to a head in a dozen crazy and surprising ways.

The play’s marketing materials and director's note in the program all champion the play as an exploration of family and class. Indeed, questions of class permeate the text, with such lines as "I don't want ghetto therapy," and multiple moments where characters judge others' worth based on their financial stability. Ultimately, though, I left the theater with more questions about the nature of goodness than anything else. Is it better to be the empath that runs to rescue those in need, or to be the too-honest friend offering a reality check? And is lying really the most merciful thing to do when the truth is upsetting?

And then, of course, there’s the biggest question of all...Who and what in the world is Becky Shaw?? Did she really mean to tear the Slaters apart just to get closer to Max? Is she a manipulative sociopath, a con artist, or just the badly damaged girl in a woman's body that she purports to be?

Becky Shaw is a mind-boggling play that makes you reconsider relationships, goodness, and class, even though the plot may leave your head spinning. The production is also well worth seeing to meet the new Community NYC company, and to see how this delightful colony of Meisner-trained artists navigates these complicated characters. Elena Kritter provides smart direction, with informative pantomimes in each transition (made seamless by Andrew Diaz's minimal but malleable set pieces) that illuminate characters' states immediately before and after each scene.

Of the cast, Forde stands out as the unstable and clingy but simultaneously sympathetic Becky Shaw. Wirth’s Andrew Porter brings delightful nuance to a likeable character that might otherwise be plowed over by the more abrasive characters in the play. Grady creates a beautiful catharsis through Susanna’s reversal at the end, and shared some strong Act 2 moments with Alexander as Max’s tough exterior slips. And Beard, who plays Susan with delightful sass and flawless comedic timing, was clearly an audience favorite. In the design realm, Sean Devare executes humor and class divides through his costumes, and Daniela Hart's buoyant and nostalgic sound design, with strong influences from Golden Age film scores, adds irony to the family drama.

The complex characters in the dysfunctional Slater family provide fertile ground for Community NYC to showcase their theatrical talents. Welcome to the off off Broadway scene, Community NYC!

(Becky Shaw played at The Grand at The Producer’s Club, 358 West 44th Street., through September 17-27, 2015. Tickets were $18, available at brownpapertickets.com/event/2181638. For more information visit http://thecommunitynyc.com/productions/theatre/.)